2013: A Major year for Australian golf

A mere 13 players managed to make the cut in all four of this year’s golf majors,  but none fared better than a pair of Aussie lads who grew up less than an hour apart and once attended the same school.

Adam Scott and Jason Day tied atop the leaderboard for the lowest score in relation to par across all four events – their +2 an indication of just how tough the major test was in 2013. 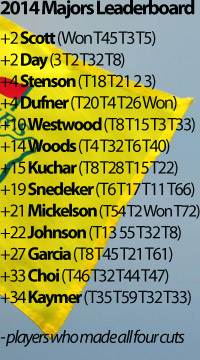 Scott became the first Australian to win a Green Jacket when he clinched a dramatic play-off victory over Angel Cabrera at this year’s Masters.

They were readying the champagne corks again when the Queenslander hit the front with seven holes to play at Muirfield. But it wasn’t to be, Scott wilting to finish in a tie for third behind a late-surging Phil Mickelson at the Open.

Scott carded a total of -5 to finish in a tie for fifth at the USPGA, with the U.S. Open being the only major where failed to threaten, finishing T45 at +15.

His collective efforts across golf’s four showpiece events saw him pocket a cool $2.2 million – more than any of his rivals. But scores and statistics aside, this year for Scott was about redemption – not just personally, but for his country.

His Augusta triumph helped a proud sporting nation tick the box of a feat which had eluded its grasp for more than three-quarters of a century. One man had of course come close.

Greg Norman finished runner-up in 1986, bogeying the last hole to miss out on a play-off with Jack Nicklaus. A year later, he lost in a play-off to Larry Mize, who chipped in to win.

Then in 1996, in what is remembered as one of the greatest sporting ‘chokes’ of all time, Norman blew a six-shot lead over Nick Faldo heading into the final round; crashing to a disastrous 78 to lose by five strokes.

It became somewhat of a defining national moment in Australia. That was, until Scott set things right.

The PGA Tour voted Scott’s Masters victory the No.1 moment of 2013. Re-living the battle down the 18th between he and Cabrera, it’s easy to see why.

“Australia is a proud sporting nation and this is one notch in the belt that we had never got,” Scott said after the victory, before paying tribute to his idol.

“There was one guy who inspired a nation of golfers and that’s Greg Norman,” he said. “Part of this definitely belongs to him.”

In winning, Scott erased some of his own personal golfing demons – none more than his stunning capitulation to lose to Ernie Els at last year’s Open Championship at Royal Lytham.

But like many great Australian sportsmen and sportswomen throughout the years, Scott’s fighting determination handed him the last laugh.

There appears a similar storyline emerging with his compatriot Day, who is yet to collect a first major trophy despite boasting a remarkable CV.

Day finished two shots behind Scott in third at this year’s Masters, adding to his 2011 runner-up finish (alongside Scott) to Charl Schwartzel.

He then went to Merion and again found one better in Justin Rose, recording another second in a repeat of his 2011 U.S. Open performance.

Next came The Open Championship, the only major where Day was yet to record a top 10 finish. True to form, he finished T32.

Finally, he would round out the season with a T8 at the USPGA Championship (where he finished T10 in 2010), making it a staggering six top-10 finishes in his first 11 majors. Tiger Woods had just two at the same stage of his career (albeit one was a victory).

Day’s performance under adversity to win the World Cup of Golf bodes well for next year’s majors.

Adding to the curious case of the consistent Queenslander, is the fact that outside of the majors, Day has scored just one top-flight (PGA and European) Tour victory at the 2010 Byron Nelson Championship.

He scored his second win of any note at the recent ISPS Handa World Cup of Golf, taking both the individual and team honours (partnered with Scott) at Royal Melbourne Golf Club.

That his first victory in more than three and a half years came in the midst of a family tragedy, having just lost eight family members in the killer Philippines typhoon, suggests Day is mentally ready to at last realise golf’s greatest accomplishment.

“With all that stuff going … it was a very big move in my golfing career,” Day said.

“I’m very proud of what I did out there and so happy I handled it the way I did.

Becoming a major champion is a process. It’s a series of near-misses, painful failures and lessons learned that eventually merge into the necessary attributes to survive golf’s sternest tests and achieve its ultimate glory.

And Day, like Scott before him, looks to have finally paid his dues.