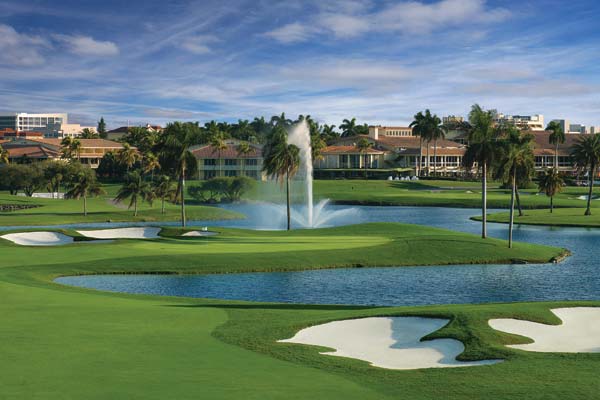 A dozen of the best: 12 magic moments from golf in Miami

At Your Golf Travel this month, we’re thrilled to be sending you Long to Miami to play at some of the world’s most iconic courses – including the TPC Blue Monster at Doral and The Champion at PGA National.

To celebrate, we’ve dug through the archives to bring you 12 of the most memorable moments from PGA Tour events in Miami.

Few players have enjoyed such an affinity with the Blue Monster like The Shark. In 1996, Norman put aside a host of distractions – including having to complete four holes from his darkness-suspended third round on the final morning, with a relief driver after his old one “went dead” on the range – to capture a record-equalling third title at Doral.

Scott Hoch and Jim Furyk, good friends and partners in the Ryder Cup, each had birdie putts on the second playoff hole Sunday evening as darkness quickly gathered. Hoch said he couldn’t read the line and asked for the playoff to be suspended. It turned out to be a good move. Hoch made his 9-foot birdie putt (that he might have misread on Sunday in the dark) before playing three perfect shots on the 18th to beat Furyk on the third playoff hole.

In a playoff with Scott Verplank, Craig Parry sent his second shot on the infamous 18th – a six-iron from 176 yards – directly at the pin. The ball never left the flagstick, landing just short before trickling in for the eagle and the win. That moment would be the last time Parry stood on the winner’s dais at a PGA Tour event… but hey, what a way to go out.

At 360 yards, the par-4 dog-leg 16th hole at Doral sounds like a driver-wedge at best… right? Well that’s unless you’re Tiger Woods. At the peak of his powers and with that trademark ruthless aggression, Woods became the first person in the tournament’s history to stick a driver straight over the trees and carry the green on the fly.

It shaped as a battle for the ages… Tiger Woods and Phil Mickelson, the No.1 and No.3 players in the world, paired together in the final group of the day at the 2005 Ford Championship. What transpired will forever be remembered as one of the greatest duels in golf. After trading punches all afternoon, Woods, who began the day two shots behind Mickelson, made a 24-foot birdie putt on 17 to take the lead. Mickelson would have a 30-foot chip lip out on the final hole, for Woods to sink a par putt for his 42nd victory.

After opening with a 1-under 71, the World No.1 produced a scintillating round of 66 on the second day of the WGC-CA Championship. Woods would never be headed for the remainder of the tournament, running out for his sixth WGC-CA Championship and his 13th WGC title.

Regarded at the time as the best player without a World Golf Championship, Phil Mickelson had to overcome a stomach virus that sent him to hospital on the eve of the final round plus a spirited challenge from Nick Watney to win at Doral. Watney fell 1-inch short with his 29-foot putt for birdie on the final hole, a putt that would have forced a playoff on a day where there were seven lead changes between the two in the virtual match-play duel.

Originally founded as the Jackie Gleason’s Inverrary Classic, Jack Nicklaus would win at the course in three consecutive years from 1976-78. First, he’d win The Players Championship (it would replace the Inverrary Classic that year), then down Gary Player by a record margin of five-strokes in 1977, before birdying the final five holes in a row in the 1978 tournament to cap the trifecta.

Corey Pavin was one behind Freddie Couples when he stepped over a 136-yard shot with an 8-iron at Weston Hills. He holed it on the fly for eagle to go up by one. Then he went to the clubhouse and watched Couples drop a 118-yard wedge to 10 inches to make birdie and force a playoff. Pavin would make a 15-foot birdie putt on the second playoff hole to seal an unbelievable victory. 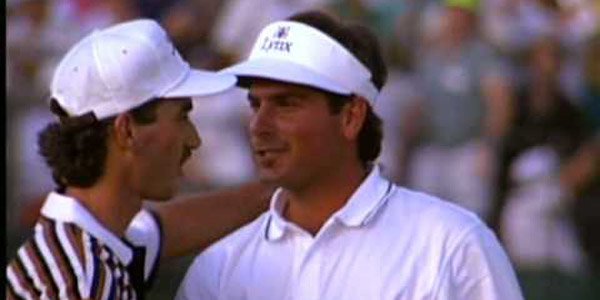 Commiserations Freddie … Corey Pavin produced the sort of comeback you could only script in a movie to win the 1992 Honda Classic.

Nick Price started the final round of the Honda Classic three shots off the pace, before making a double-breaking 35-foot putt for birdie on 17 to snatch the lead from Craig Parry. The pair par the 18th, leaving Price with a 5-under round of 66 and a memorable tournament win.

Having started the final day seven shots off the lead and seemingly in need of a miracle, Padraig Harrison erased the deficit with a stunning 9-under round of 63 to force a three-way playoff with Vijay Singh and Joe Ogilvie. The American was eliminated on the first playoff hole, leaving the Irishman and the World No.2. Singh would miss a two-foot putt to hand Harrington his first USPGA Tour victory, and the first by an Irishman.

In what must rate as one of the most frantic conclusions in PGA history, four players – Jose Coceres, Boo Weekley, Camilo Villegas and Mark Wilson – headed to a playoff on Sunday afternoon. All four made par of the par-5 18th before darkness pushed the playoff to Monday. Weekley and Villegas were eliminated with bogeys on the first hole of the day. Wilson rolled in a 10-footer on the par-3 17th, then watched as Coceres’ putt from the almost identical spot hit the lip and rolled away.