At The Open with Your Golf Travel 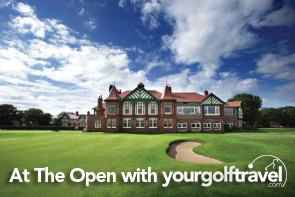 The 2012 Open Championship has been and gone and what an Open it was! Tiger prowled but once again failed to pounce on the final day while Luke Donald restored some British pride after a rough start to the tournament with a grand final day display. Adam Scott lit up the Lytham fairways for 68 holes before being succumbing to the pressure of being the front runner in the biggest tournament of them all while big Ernie kept plugging away until the Claret Jug was in his hands once again. Our congratulations go to “The Big Easy”.

The weather at Lytham was kind to all in attendance with the rain and wind staying away and the British summer finally making a long overdue appearance. Spirits were high on and off the course with Royal Lytham and St Anne’s once again becoming the centre of the golfing universe for a few short days.

In a time when the UK economy is struggling and the weather has been less than favourable for golfers, The Open Championship and the arrival of some good weather was just the catalyst required to inject some life back into the golfing masses. As usual Your Golf Travel were right there on the forefront, ensuring that golfers got a full dose of Open fever during their time in Lytham & St Anne’s.

See what we were up to at The Open – featuring Beach Golf, Buses and more! 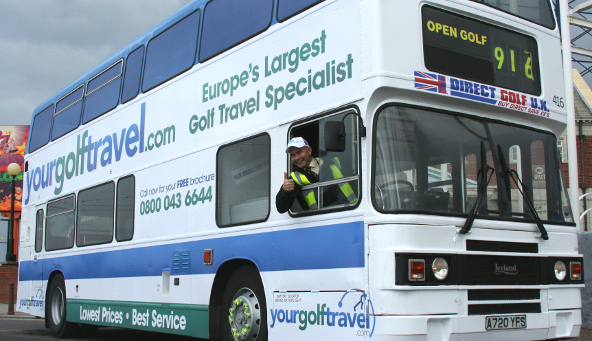 YGT Double-Decker Buses were doing the rounds, making sure golfers were getting to Royal Lytham & St Anne’s safe and sound.

Your Golf Travel kicked the week off in style by arriving in Lytham having walked 300 miles from the Cancer Research offices in London, all in aid of the Seve Ballesteros Foundation and Seve Day 2012. This was a great achievement by all involved and a fitting tribute to the great Seve Ballesteros who of course will forever be synonymous with Royal Lytham & St Anne’s. What a way to start the week! 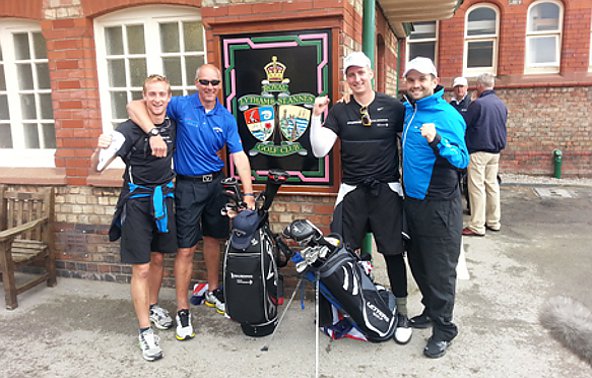 With the 300 mile “Walk for Seve” complete, the fun surrounding the Open Championship had begun.

It wasn’t just YGT who were spreading the golfing love at The Open though, as we had teamed up with our friends at Direct Golf UK and Today’s Golfer to give back to the golfing masses and ensure that Open fever reached fever pitch!

Golfers on their way to see the action at Royal Lytham & St Anne’s were treated to free caps courtesy of Your Golf Travel, Direct Golf UK & Today’s Golfer.

A dozen double-decker buses adorned with YGT & DGUK logos transported flocks of golf fans to and from Royal Lytham & St Anne’s while golfers arriving at the course were greeted with FREE caps and £20 Direct Golf UK gift cards. In total 100,000 gift cards, the total value of which was a staggering £2million, were handed out to the golfing masses in addition to tens of thousands of hats which were gleefully gobbled up by all, especially those who had shiny bald heads to protect from the sun that bathed Lytham throughout the tournament!

Golf fans were only too pleased to don their free caps when the sun came out.

As if all this wasn’t enough, golf fans based in and around Lytham & St Anne’s may have seen a giant YGT advertising board doing the rounds. This was our way of giving something back to our loyal customers who, once having spotted the board, could text in to claim a complimentary £50 YGT voucher! For those of you who didn’t catch a glimpse of this, fear not, as for a limited time only you can still text “YGT” to 60066 to claim your £50 Voucher.

Did you spot the YGT £50 Voucher Van around town? If not be sure to text in to claim yours while the offer still stands!

Your Golf Travel Co-Founder, Ross Marshall said, “We at Your Golf Travel saw The Open as a great opportunity to give something back to our loyal customers and the golfing masses to ensure everyone attending Royal Lytham & St Anne’s got a healthy dose of Open fever. We were delighted to kick the week off with the completion of Walk for Seve and spend our time at Lytham soaking up The Open atmosphere, mingling with the golfing public and handing out our free hats which hopefully went some way to shielding golfers from the wind, rain and eventually the sun, which made a welcome appearance over the weekend! Our work with our friends at Direct Golf UK and Today’s Golfer was well received by the golfing public and we look forward to spreading more golfing cheer at future Open Championships.” 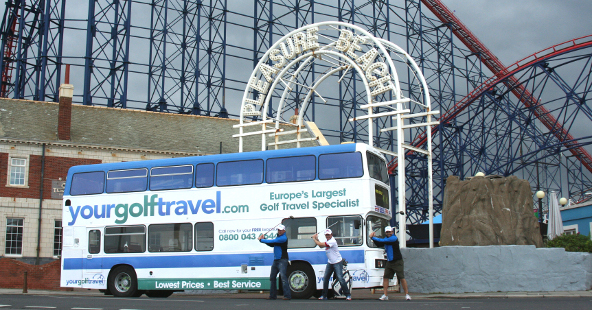 YGT and Direct Golf UK Buses ferried golfers from as far away as Blackpool, passing the famed Pleasure Beach along the way.

As well as treating those attending golf’s oldest major to a bevy of golfing giveaways, Your Golf Travel, Direct Golf UK & John Letters ran a series of junior golf clinics on St. Anne’s Beach. Aimed at inspiring a generation of potential golfers to get involved with the game, “Golf on the Beach” was inspired by Seve’s two Open Championship wins at Royal Lytham & St Anne’s and the way in which he taught himself to play the game on the beach in his home village of Pedrena in Northern Spain. Every day during the Open Championship, the team welcomed kids, brought along by their parents, to St Anne’s Beach to enjoy a series of skills challenges that allowed them to see the fun side of golf and hopefully learn the great game the way Seve did.

Direct Golf UK, Your Golf Travel and John Letters teamed up to get kids involved with golf the way Seve taught himself to play with “Golf on the Beach”.

Co-Founder of Your Golf Travel, Andrew Harding, was down on the beach to see “Golf on the Beach” in full flow and said, “Getting kids involved in golf is key for the future of the sport. While the likes of Tiger and Rickie Fowler are attracting more and more youngsters to the game, it is still important for people like myself and the guys from Direct Golf UK and John Letters to get involved in promoting the sport at the grass roots level. You never know; we may just unearth Britain’s next golfing great.”

We at Your Golf Travel set out to The Open to inspire golfers of all shapes and sizes to hit the fairways this summer and with the timely arrival of the British Summer, we have our fingers crossed for the sun to shine on Britain’s fairways for the rest of the summer months.

See you at Muirfield for the 2013 Open Championship!