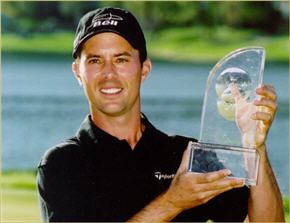 This weekend sees perhaps the most unique event on the PGA Tour taking place with the AT&T Pro AM. Tour pros are joined by stars of stage and screen to contest the four day event, which is played over three different courses with the top 70 Tour players and top 25 celebrities going into the final round.

The three courses to be uses are Monterey Peninsula Country Club, Spyglass Hill and Pebble Beach and it is the latter where the conclusion of this event will be played. It’s also a chance for many of the Tour players to get some practice over the course which will host this year’s US Open.

In true links-golf style events played at Pebble Beach are often influenced by the weather but even more important is course-form. Players who hold good records over the course and can play well when the weather turns ugly hold a huge advantage. So who do we think will win come Sunday?

Defending champion Dustin Johnson will be looking to build on his tie for third behind Steve Stricker at Riviera last week. Johnson was well in contention in that event and showed he could handle wet conditions when rain hit the second round. Johnson was perhaps slightly fortunate in this event last year, after it was reduced to 54-holes due to incessant heavy rain and having led the tournament at that stage pretty much won by default.

Phil Mickelson is also in the field but after lacklustre showings in each of the previous two tournaments and few signs that Mickelson’s A-game was on the cusp of returning, he is overlooked again for this tournament.

South Africa’s Retief Goosen has been getting into good positions in recent tournaments before crashing dramatically down the leaderboard. Still, with seven top-10 finishes in ten starts the former major winner handles wet weather better than most and has performed well in his two previous starts over the course. The big question mark is whether the player retains the bottle to see the event through if he finds himself in contention going into the final day.

Nick Watney is yet to come to the boil although signs were encouraging at Torrey Pines where he finished 9th. He was expected to build on that but missed the cut at Riviera and will be looking to get back on track. Watney has a top-10 finish over the course and providing there are no after-effects from missing out on last weekend could be in the running.

Tim Clark will still be ruing his decision to lay short at the final hole of the recent Bob Hope Classic and will be looking to make amends by capturing a first US Tour win. Clark, however, has a bit of a reputation as being a bottler and his chances will hinge on him holding his nerve on the greens when the pressure is turned up. The South African boasts some impressive form figures over the course, however, and also has two top-5 finishes from his last four Tour events suggesting he has hit form. With a solid short game, Pebble Beach’s layout should play to his strengths and he looks a good bet to get among the places.

However, the chance of Mike Weir in this tournament looks to be a winning one. He was the selection to win the Bob Hope Classic, and the Canadian performed well to finish in joint-sixth position behind Tim Clark. Weir has perhaps the strongest course form on show and has plenty of experience in inclement weather. He has to overcome a missed-cut at Riviera last week but the left-hander ticks too many boxes to ignore and is the selection to win at a tasty 28/1.