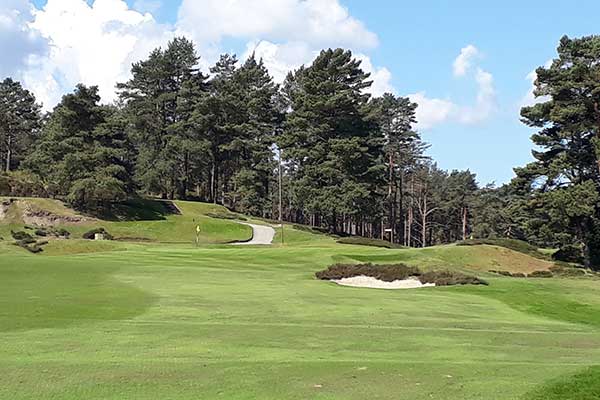 When golf began to expand in Europe, leaving the shores of Scotland behind, inland courses started to crop up away from the vaunted ‘links lands’. A number of golf courses were first built on impervious clay soils with very poor results which lead the likes of Willie Park, Jr., Harry Colt, Herbert Fowler and J.F. Abercromby to begin searching for suitable well drained soils on which to build their golfing masterpieces.

10 of the Best Heathland Golf Courses

What is a Heathland Golf Course

What they settled on was the ‘heathlands’ which are fast draining, sandy soils often spanning areas with gently rolling terrain. Heathland courses then, boast the kind of firm, sandy turf present at all classic links courses which is simply perfect for golf. In fact, many view heathland courses as a middle ground between links classics such as Turnberry, Royal St Georges and Royal Birkdale and parkland gems like The Belfry’s Brabazon Course.

Other heathland characteristics include swathes of heather, devilish gorse, pretty rhododendrons and towering Scotch fir and pine trees. In addition to intriguing terrain ideally suited for golf, these heathland ingredients combine to form some of the most visually stunning golf courses in the world.

At the time when these courses first started to appear however, many golf purists thought only a fool would build golf courses on these inland sites but the discovery was a major step in the development of golf course architecture. Thanks to these early pioneers we can count many of these heathland courses as some of the world’s finest.

So where are these heathland courses and which ones should intrepid golfing explorers look out for on their next golf break?

Well heathland golf is most closely associated with Britain, specifically England and even more specifically southern counties including Surrey, Berkshire and Sussex. This is where some of the finest heathland courses in the world can be found and, conveniently, many of them are within a stone’s throw of each other; perfect then, for an English golf tour!

Among these southern gems are famous names such as Sunningdale, Wentworth, Swinley Forest, Walton Heath and West Sussex. While these courses are widely considered to be the finest examples of heathland courses, there are plenty of lesser known examples that simply cannot be overlooked and, conveniently, will be much easier to secure a game on!

In the same vicinity as the aforementioned courses you can sample some serious heathland golf at Hindhead Golf Club, East Berkshire, Royal Ashdown Forest and Liphook. All of these courses are roughly an hour’s drive from London and easily accessible from major motorways.

Heathland golf though, is not only found in and around England’s capital as there are many fine examples further north including arguably the finest heathland course in all the land, the Hotchkin course at Woodhall Spa. 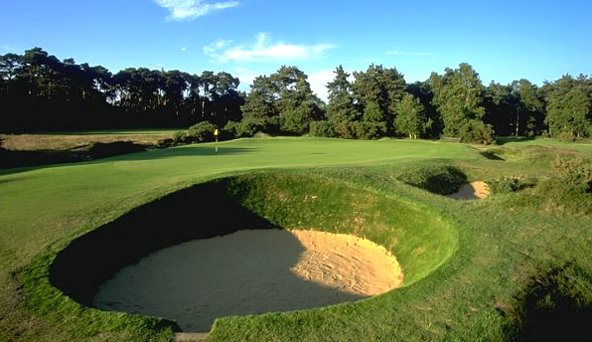 The Hotchkin Course is well known for its superb bunkering.

A number of key moments have influenced the development of this remarkable course; Harry Vardon’s original 1905 design was reworked just before the Great War by Harry S. Colt, before the English Golf Union bought the site in 1995. The firm heathland turf is the basis for the Hotchkin’s character, where the majestic holes are lined by towering birch pine and broom.

The predominant hazards, apart from the woodland, are the bunkers; around the greens in particular, the Hotchkin is known for its cavernous sand traps. Recently ranked as the 25th best course in the world, this inland gem is without doubt a classic, and deserves its incredible reputation; any serious golfer should make a golf break at Woodhall Spa a high priority.

Push even further north towards West Yorkshire and you will stumble across the stunning Alwoodley which, like the Hotchkin at Woodhall Spa, is without a doubt one of the finest inland layouts in the whole of the UK. The Mackenzie Course here was the first to be completed by Dr. Alister Mackenzie, who went on to compile a portfolio including immense names such as Augusta National.

The course spans an area of delightful heathland, whose springy turf is perfect for golf. The club itself is traditional and has resisted any temptation to alter Mackenzie’s original design. Open Championship regional qualifiers and countless national amateur events are among the high profile events to have graced Alwoodley, so why not follow in some famous footsteps during a golf tour of Leeds’ outstanding championship gems?

Alwoodley – the finest heathland layout in the North of England.

There are also heathland courses further south than the Surrey sandbelt and Isle of Purbeck in Bournemouth is a real gem. The Purbeck may only measure 6,295 yards, but there is no shortage of menace in the shape of the heather and devilish bunkers. Arguably the most picturesque course in the area, the Isle of Purbeck is a firm favourite on Bournemouth’s excellent golfing trail.

England may be the home of heathland golf but you can also find heathland beauties where the game was first played. Although Scotland is better known for its considerable collection of links classics, there are a good number of inland layouts of the very highest quality, one of which stands out as Scotland’s answer to the heathland beauties if the Surrey sandbelt.

Book a golf break at the Macdonald Spey Valley Championship Resort and you will have the opportunity to sample the delights of the stunning Spey Valley Course. Although this course is an amalgamation of various styles there are clear heathland characteristics.

Spey Valley features many heathland elements as well as a few hints of parkland and links golf.

As you would expect from a Dave Thomas design, this is a ‘proper’ golf course and accompanied by the vivid purple heather and towering peaks of the Cairngorms National Park, it becomes a truly awesome place to play golf. The signature hole will undoubtedly be the par-5 fifth hole; measuring 641 yards, it is unlikely that even the longest out there will be having a go at the green on what is officially the longest hole in Scotland.

Also in Scotland lies the spectacular and thoroughly demanding Dukes Course which attached to the luxurious Old Course Hotel; one of the very best in the whole of the UK. Played from the tips, this is the longest golf course in Scotland, and it represents the perfect accompaniment to the classic tracks at St Andrews Links. 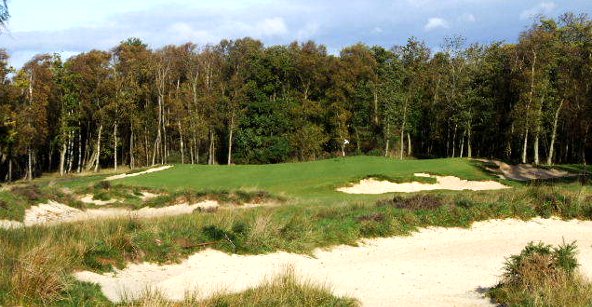 The Duke’s Course and its wild, rugged bunkering.

Heathland Golf Courses outside the UK

Heather, gorse and towering trees are all present and, as with many top heathland courses like the Hotchkin at Woodhall Spa, the bunkering is tremendous. Reminiscent of the stunning Whistling Straits Course in the USA, the bunkering on the Dukes is wild and ever present and if you manage to avoid the sand for 18 holes you will stand a good chance of posting a good score.

It is clear then, that there are plenty of heathland opportunities in the UK but interestingly enough the best heathland course, and number one ranked course in the world is to be found in New Jersey. By the way… the likelihood of securing a game on this course is minuscule – Pine Valley Golf Club is a highly exclusive club with male-only membership is by invitation from the board of directors only – but we just felt compelled to include it!

Pine Valley is a perennial fixture atop lists of the world’s best golf courses and looks set to remain there for the foreseeable future. Out of the 18 holes, 10 of them are of such a high quality that they can apparently be considered to be signature holes while, from the remaining 8, 5 are said to be breathtaking, two are merely exceptional and the 12th, the runt of the litter, is bad enough to be considered just a good hole…oh the shame!

While you may not be able to secure a game at Pine Valley we have surely armed you with the information necessary to locate a fine heathland course and if you have not yet sampled the delights of such a layout we strongly suggest you pick one from the hat, dust off the clubs and hit the fairways.