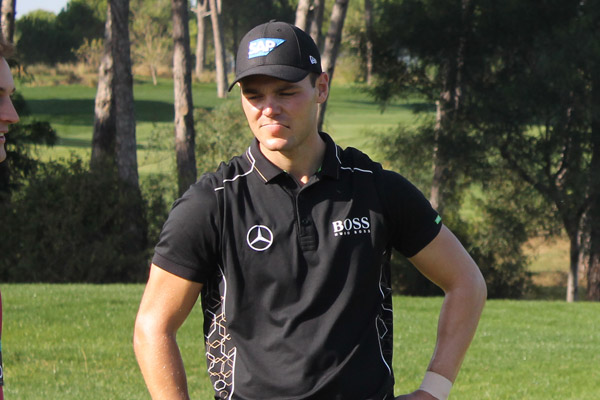 As most of you will probably know, Martin Kaymer was up to his usual tricks in Abu Dhabi last week.

The German has made Abu Dhabi GC somewhat of his own private playground in recent years, having won the HSBC Abu Dhabi Golf Championships no less than three times to date. Surely after three days of sublime play that saw him race to 20 under par, leaving his competitors in a cloud of Arabian dust and six shots adrift going into the final round, the win was a formality?

Well…as the great Bobby Jones once said, “Golf is a game that is played on a five-inch course — the distance between your ears.” It doesn’t take much for the wheels to come off when your mind isn’t quite right, even for the best in the business, and although Kaymer started his final round well, stretching his lead to a massive 10 shots with 14 holes to go, he collapsed and eventually finished in 3rd.

After his first three rounds could anyone have imagined Kaymer messing it all up in Abu Dhabi?!

Kaymer’s so called “choke” was pretty unbelievable. But it’s not the worst the world of golf has ever seen.

Here’s our top 3…which one do you think is the worst?

For someone with so much self confidence – The Shark once said (and I’m not kidding!) that he was “In awe of himself” after shooting a final round 64 on a tough as nails Royal St Georges in the 1993 Open Championship – Greg Norman had more than his fair share of collapses, mixed in with a large dollop of bad luck admittedly, on the golf course. His most notorious though, came at Augusta in 1996.

After firing an astonishing 63 – the lowest ever score in a major championship – in the opening round, Norman eventually crafted a 6 shot lead over Nick Faldo going into the final round and seemed certain to finally land the title he craved the most.

Norman came close at Augusta a number of times and while Larry Mize’s chip-in win was a rotten bit of luck for The Shark, his loss to Faldo in 1996 was more to do with his own poor play.

Faldo came out guns blazing though, eventually carding a 67 which meant in hindsight; Norman only needed to manage a level par 72 – 9 shots worse than his effort in the opening round – to win.

Seven shots up with seven holes to play in the biggest tournament in golf (for anyone on that particular side of the Atlantic that is!) and you’re one of the greatest players of all time. Done deal right?

Well…golf is a funny game from time to time so to put it simply, NO!

Arnie started the final round 3 ahead of Billy Casper and had stretched that lead to 7 by the time he made the turn. That lead was down to 5 with 4 holes to play but surely that was still going to be enough to get it done? Nope…just 3 holes later the lead was caput and after tying the last, an 18 hole Monday playoff was in the offing.

Once again, in the playoff, Palmer looked to be in control and was up by 2 with 8 holes to go. Amazingly he’d go on to give up 6 shots over the remaining holes and Casper eventually ran out as winner, beating Palmer’s 73 with a tidy 69.

As the old saying goes, “It happens to the best of us.”

They say links golf is a great leveller and with that in mind it’s perhaps not such a surprise that the Open Championship throws up the odd surprise winner here and there; nobody would have expected the little-known Frenchman, Jean Van de Velde to hold a 3 shot lead on the 72nd hole of the 1999 Open at Carnoustie anyway!

But that’s exactly what happened…and what happened on that 72nd hole sealed Van de Velde’s place in the golfing history books for good. Unfortunately for all the wrong reasons…

Now…standing on the 18th tee with a three-shot lead in the Open, most golfers, even those with an adventurous disposition, would surely be thinking it’s a good idea to take a big number out of the equation? Not Jean though.

With only a double bogey needed to win, Van de Velde could probably have played the final hole of the 1999 Open with a 7 iron and still won. But every loss is another man’s gain and Van de Velde’s capitulation allowed Paul Lawrie to write his name into the record books by staging the biggest final day comeback in major history. He started the day 10 shots behind the leaders!

The unheralded Frenchman ill-advisedly pulled the driver out of his bag, but he got away with that, stopping just a few yards from the treacherous Barry Burn.

“Phew…maybe I’ll be more cautious on my next shot.” Surely a lay-up would be best for shot two? Nope! Van de Velde again picked the aggressive option and went for the green and the rest is history.

A fleeting visit to the grandstand on the right of the hole, a duffed shot into the Barry Burn and a heart-wrenching yet hilarious wade into the water later and Van de Velde eventually made a tidy up and down from the greenside bunker to sneak into a playoff…which of course he would lose.

With golf’s greatest prize just a double bogey away, the sensible approach was the way forward.