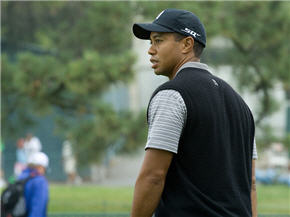 All eyes – and a fair few quid – will be on Tiger Woods when he makes his return to competitive golf at next week’s US Masters.

At the time of writing, Woods is currently trading at a best priced 9/2 to win the green jacket, which will undoubtedly prove popular amongst win-only punters. But for a bit of variety, several bookmakers have formed special markets about what might happen when Woods takes to the first tee.

Ladbrokes and William Hill are two bookmakers offering odds on Tiger Woods markets, in addition to their usual range of tournament markets such as outright winner. Depending on your bookmaker of choice you can also bet on such outcomes as Woods’ first drive. If you fancy Woods’ opening drive to split the fairway you can back the fact at odds of just 4/9, while its 13/8 that Woods finds any other part of the course from the tee. And if you fancy him to clatter his opener into the trees you’ll be rewarded with odds of 5/1.

Think Tiger will find the water during the Masters? If you think he’ll keep his ball dry, you’ll be getting odds of 8/13 while its 6/5 he consigns at least one ball to a watery grave. And the chances of Woods hitting a hole-in-one at any point during the tournament returns a handsome 100/1, which is surely worth one pound of anyone’s money!

Rupert Adams, spokesman for William Hill says further markets will be opened on the run-up to the season’s first major and punters will be able to bet on such outcomes as will Woods have an argument? Or throw a club, or break a club in anger? Will there be a streaker on the final green and will Elin be seen in the crowd?

It seems punters are going to be spoiled for choice when it comes to betting on this year’s US Masters, with many markets – both serious and silly – quoted for those looking for wagers to get their teeth into.

Watch out for our betting preview for the US Masters, which will be published next week during the run-up to the season’s first major.