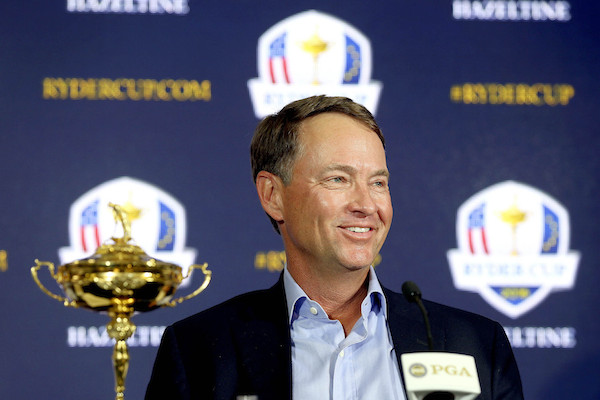 By Dan FoleyFebruary 25, 2015No Comments

Davis Love has been announced as the United States Ryder Cup captain for the contest at Hazeltine in 2016.

Love was the skipper in 2012 when the USA built a 10-4 lead on Saturday afternoon only to be defeated 14.5-13.5 by the Europeans in one of the greatest Ryder Cup comebacks ever seen, known as the ‘Miracle at Medinah’.

And the PGA of America has announced that, in a unanimous decision by the 11-man Ryder Cup task force, he has been handed the reins again as the Americans attempt to stop Europe from claiming a fourth consecutive victory in the biennial contest.

Love’s first act as captain was to confirm that Tom Lehman would serve as one of his four vice-captains at a press conference where he was flanked by Lehman, Phil Mickelson, Rickie Fowler and other members of the task force that was formed in the aftermath of the 16.5-11.5 loss at Gleneagles in September.

That task force has now been disbanded but Love insists its work since the defeat in Scotland means he will better prepared for his second bite of the cherry as he takes on his counterpart and friend Darren Clarke in Minnesota.

“I’m here with the same goal I had in 2012 but not as the same captain,” he said. “The Ryder Cup task force has been an open, honest, team-building experience.

“The collaborative effort of so many veterans of the Ryder Cup is a result of the passion and commitment to build a team structure that will lay the groundwork for future teams.

“It’s a new business model, a new team-building model that comes from being given an opportunity by the PGA of America to come together and use all of our veteran experience to build a new team culture and a consistent plan for the future.

It has often been levelled at the Americans that they lack the sense of unity possessed by the Europeans to compete in a team event but Love was at pains to stress that his captaincy would very much be a collective effort.

And the 50-year-old admitted that one of his major regrets from 2012 was that he had not utilised the experience of his predecessors.

“We were not sharing enough information, we were nor passing down a playbook to the next captain, whether it’s structure or organisation.

“Little things add up. I did make a few mistakes. I learned a lot from Medinah. I’m looking forward to taking what I learned, what Phil, Tiger (Woods) all these guys on this commission have pointed out to all of us.

“I can be a good leader as long as I have these guys behind me. I looked at every one of them and said, ‘if you guys have my back on this, I’m willing to do it again, I can’t go in and do it on my own’.”

He added of 2012: “I thoroughly enjoyed my experience, my players played their hearts out, they finished with style and class, they’ve been nothing but great representatives of the US team so I never thought I would have another chance.”

Mickelson, who was left out of a full day’s play for the first time in his Ryder Cup career on the Saturday, said at the time: “Unfortunately we have strayed from a winning formula for the last three Ryder Cups, and we need to consider maybe getting back to that formula that helped us play our best.”

That outburst appears to have sparked a new dawn for the Ryder Cup in America but Mickelson insists that was not necessarily his objective.

“I wasn’t thinking that at the time but I am excited about where we are now and where we are headed. Not just into 2016 but for the next 10 or 20 years,” he said.

“I’m excited about the next generation of players, Rickie and Jordan Spieth and Patrick Reed and guys who are going to be on the upcoming teams that will have input.”

The PGA of America also confirmed that a new six-man Ryder Cup Committee was to be formed with responsibility for selecting future captains and vice-captains and a “wide array of matters related to the Ryder Cup”.

It was also confirmed that Love will have four captains picks and that two of his vice captains would be former captains.