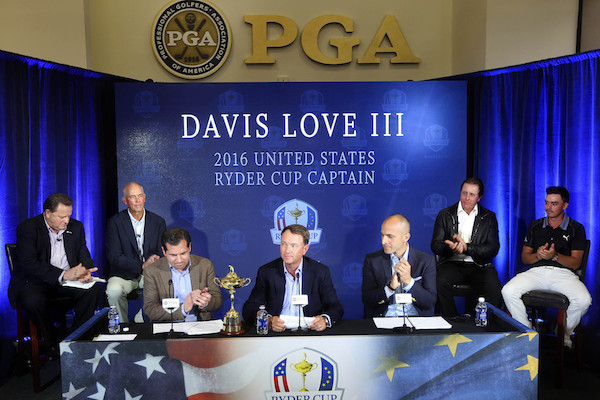 By Dan FoleyFebruary 25, 2015No Comments

Love, who will captain the team for a second time, hopes to help the Americans avoid a fourth consecutive defeat to Europe at Hazeltine in 2016.

Love was in charge in 2012 when the Europeans produced the ‘Miracle at Medinah’ to turn a 10-4 deficit into a 14.5-13.5 victory but it was last year’s 16.5-11.5 defeat at Gleneagles that prompted much soul searching in the American ranks.

An 11-man task force was formed made up of PGA executives, former captains – including Love – and current players including Tiger Woods and Phil Mickelson to plot a new way forward for America in the biennial contest.

The result of its work is a new six-man Ryder Cup committee with responsibility for selecting future captains and vice-captains and a “wide array of matters related to the Ryder Cup”, along with an altered qualification points system and calendar.

But Love believes it is the new spirit of togetherness created by the process that will provide dividends, beginning in 2016 when he goes head-to-head with European counterpart and friend Darren Clarke.

“I’m here with the same goal I had in 2012 but not as the same captain,” he said. “The Ryder Cup task force has been an open, honest, team-building experience.

“The collaborative effort of so many veterans of the Ryder Cup is a result of the passion and commitment to build a team structure that will lay the groundwork for future teams.

“It’s a new business model, a new team-building model that comes from being given an opportunity by the PGA of America to come together and use all of our veteran experience to build a new team culture and a consistent plan for the future.

“What we created is a new process for continuity and teamwork which will prepare us for many years of success.

“So 2016 will be a collaborative effort of many individuals from the task force, past Ryder Cup captains, veteran players of the Ryder Cup to create the best environment for our team to be totally prepared to compete at Hazeltine National.”

The new sense of togetherness comes after Mickelson’s public criticism of 2014 captain Tom Watson immediately after the defeat in Scotland.

The five-time major winner admitted that an overhaul of the process was not necessarily what he had in mind on that Sunday afternoon but he was excited about the future.

“To get everybody together, to have an opportunity to have a voice and be heard and to actually make an impact and have a difference; it’s exciting for everybody here,” he said.

“I think it’s exciting, what we are trying to lay down here this upcoming Ryder Cup and the input that is being taken in by Davis, by all different parties, and implemented as kind of a blueprint or foundation for the upcoming multiple Ryder Cups, not just this next one, is exciting for the generations to follow.”

Love announced that 2006 captain Tom Lehman will serve as one his vice captains, with the PGA of America confirming the 1996 Open champion would be joined by another former captain and two “individuals with extensive Ryder Cup experience”.