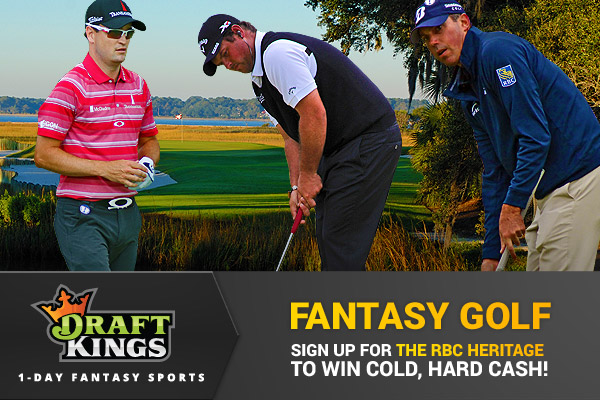 Sign up to DraftKings Fantasy Golf and you could win some serious cash on a weekly basis! The concept is simple: draft a 6-man team for each week’s PGA Tour event and sit back and enjoy the show.

I signed up a few weeks ago, and have had a small return on investment so far. Here’s how I got on last week and who I’ve gone for at the Valero Texas Open…

I had a strong showing from my guys at the RBC Heritage at Harbour Town Golf Links with all six players making the cut for the 1st time since I started playing.

VALUE PICKS: Davis Love III, Jim Herman and Colt Knost all made the cut as pointed out above, which is really all I was hoping for from them as I had used the money I saved on them to load the top end of my team with big name players. Colt Knost though, with his T14 finish was a great return on my investment, chipping in with a solid 69 points.

THE BIG MONEY: My big name players at Harbour Town were Jason Day and Matt Kuchar, who of course has previous form at this course having won the RBC Heritage in 2014. With a T9 finish, Kuch bagged yet another Top 10 finish on the PGA Tour and a decent haul of points.

Jason Day was my #1 man in theory though and after being tied for the lead at various stages over the 1st 2 days I was licking my lips at the prospect of him pulling away from the field over the weekend and supplementing the decent platform my value picks had given me. A 3rd round 79 put pay to any chances of winning but a strong finish on Day 4 still secured a decent tally of 64 points. Without that round of 79 – a total anomaly for Day at the moment if we’re honest – Day could well have won and bagged me some serious cash.

It seems like it’s only a matter of time before Reed wins again judging by his current form. He’s had 8 Top 10 finishes already this season and is the highest ranked player in the field this week.

In the Top 20 in Strokes Gained tee-to-green and 6th in scrambling…a handy combo!

Has had previous success with two wins at this tournament but that was at a different venue…however he has finished in the Top 20 in his last two starts at TPC San Antonio so this course certainly doesn’t over awe him. He actually lead the field in strokes gained tee to green last time out and was 4th in that category the year before that.

Since an impressive display at The Masters, Bryson has turned pro, signed with Cobra Golf and made a cracking start to his pro career at last week’s RBC Heritage. That course probably suited his analytical approach to the game and TPC San Antonio is a totally different test so I’m not 100% sure what to expect. He’s much longer than people think though with an average driving distance of 292 yards and he led at the field at Harbour Town in strokes gained tee to green.

Missed last two cuts (only just) but finished well at Valspar (Innisbrook) with a T11 finish. Jason is very much a Bargain Bucket pick which freed up some money for my big name players.

Missed last week’s cut but two Top 20 finishes preceded that. Hubbard’s ranked inside the Top 30 on tour in fairways hit which could count for a lot on a long course with such narrow fairways as TPC San Antonio. Another affordable pick who has made 14/17 cuts this season.

Padraig has struggled in general – too much swing tinkering maybe? – since he won 3 majors in 2 years back in 2007 and 2008, but last year’s Honda Classic victory proves he can still do the business when he’s on form. He doesn’t miss too many cuts either and still scrambles with the best of them so at $6,500, he like Jason Gore has let me spend big at the top end of my lineup.