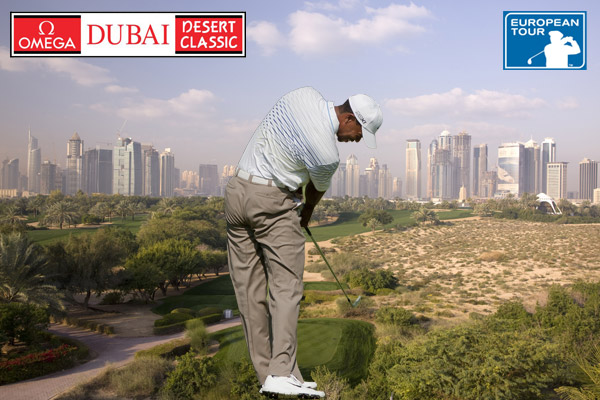 The third and final stage of the European Tour’s ‘Middle East Swing’ is up this week as the best in the business head to The Emirates Golf Club in Dubai.

The Omega Dubai Desert Classic celebrates its 25th birthday this week and a stellar cast, headlined by Tiger Woods and Rory McIlroy, will make up one of the strongest fields in the event’s history.

Woods and McIlroy will both be looking to bounce back from disappointing episodes in each of their previous outings. A needless two shot penalty (Rory broke one of golf’s “silly” rules) was all that stopped McIlroy winning the Abu Dhabi Golf Championships and Tiger will no doubt be licking his wounds after a nightmare 79 in the third round of the Farmers insurance open at Torrey Pines, historically one of his happiest hunting grounds.

Both players enjoy fantastic track records at The Emirates Golf Club as well.

McIlroy secured his maiden European Tour victory here in 2009 and has followed that up with a succession of top 10 finishes. Rory will arrive in Dubai with his game seemingly back to its best. The Ulsterman played some great stuff at the Abu Dhabi Golf Championships with only his “silly” penalty preventing him from beating Pablo Larrazabal and Phil Mickelson to the title.

Woods’ record in Dubai is even more impressive.

His first five appearances at the tournament produced five straight top 5 finishes and, after shooting a disastrous 79 at Torrey Pines last week, Woods will be looking to add a third Dubai Desert Classic title to his CV.

Tiger will be hoping to reproduce some of the sublime golf shots that carried him to the 2008 title.

Joining Tiger and Rory this week will be twenty former Dubai Desert Classic champions who have 25 major championships between them. The full tournament field is plump with 85 European Tour winners with a total of 401 Tour victories between them and even the late great Seve Ballesteros will be there in spirit as his son Javier takes to the Majilis in his father’s place.

Tiger’s record in the desert might make for impressive reading, but it is Ernie Els who is the real Sultan of Swing in these parts.

Three victories (1994, 2002 and 2005) for the Big Easy have been backed up by no less than six top three finishes in just 11 appearances at the event. Ernie also holds the course record on the Majilis and his stunning 61 back in 1994 was courtesy of 12 birdies…a record for most in a single round on the European Tour.

Of course it is not just the world’s best golfers on show in Dubai this week; the golf course in question is also a star of the show. Dubbed ‘The Desert Miracle’ when it opened in the late 80s, The Emirates Golf Club has gone on to forge a reputation as one of the finest golf resorts in the world and the event itself is viewed by many as the catalyst for the huge growth in golf’s popularity in this part of the world.

54 tournaments have been played in the Gulf since the first Dubai Desert Classic was held here in the late 80s and the number of world class golf courses in Dubai and neighbouring states such as Abu Dhabi is no secret among travelling golfers. 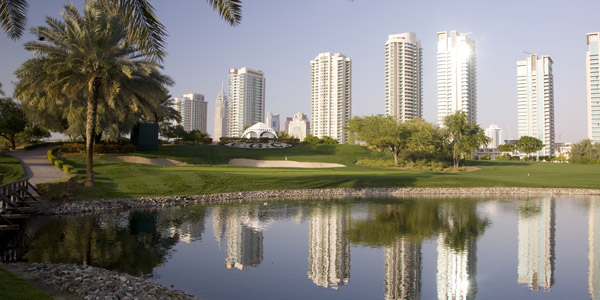 The 7th hole, a 186-yard par-3 over water, is among several highlights on the spectacularly kept Majlis course.

While it is almost impossible to ignore a much-improved Rory McIlroy, it’s hard to get excited about the 7/2 on offer. So instead we’ll side with another young star of slightly lesser profile in Thorbjørn Olesen. The Dane finally found form in Doha, producing four rounds in the 60s to finish in a tie for third at the Qatar Masters on a course where he had never finished in the top 20. Importantly, he ranked among the leaders for greens in regulation and now comes to a course where he finished T3 last year. With course experience and form on his side, Olesen looks a terrific shout to be right in the mix once again.

I’ll admit to cringing on more than one occasion when the president of the Uihlein fan club in our office plonks our weekly kitty on the young American – however this week on a very suitable course, his odds really appeal. The wide fairways at Emirates GC will give Uihlein more room for error to launch his booming drives, setting up plenty of opportunities to reach the par 5s in two. Last week in Qatar he ranked second throughout the week for driving distance and ranked inside the top five for putts per round, a stat that if repeated, will hold him in a great position to better on his 16th finish this week.