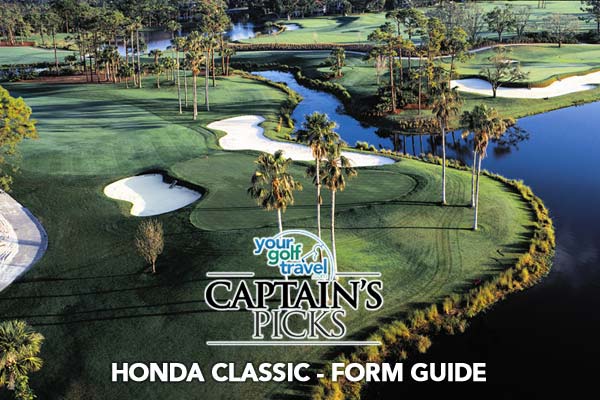 Fantasy Golf: Guide to picking your team for Honda Classic

There is an air of anticipation around this office this week with Thursday marking the beginning of the inaugural Your Golf Travel Fantasy Golf competition: Captain’s Picks.

Pride and reputations will go on the line, with several side wagers in play – not to mention some unbelievable prizes to be awarded every month. If you haven’t registered already, click here to join in the action for your chance to take out the grand prize of a money-can’t-buy experience at the 2015 Turkish Open.

Selecting your team couldn’t be easier. Simply pick a team of 10 golfers, ensuring that the total value of your squad does not exceed your budget of 100 points.

Or, if you wish, you can use our Lucky Dip team selector to automatically build a team in seconds.

You must also choose a captain each week who will earn double points for that event.

To help you get your team in order ahead of Thursday’s opening round of The Honda Classic at PGA National Resort, we’ve run through a host of players who could figure prominently this week in Florida.

Zach Johnson (14.5): has been in outstanding form this season, beating Tiger Woods in a play-off in the Northwestern Mutual World Challenge in December, then following up with a win at the Hyundai Tournament of Champions in Hawaii. At his most recent stroke play event, Johnson carded a 62 in the final round to finish in a tie for third at the Humana Challenge. The World No.7 leads the PGA Tour this year for fairways hit and is third in greens per regulation; stats that should hold him in great stead on a tricky PGA National course.

Justin Rose (15.5): enters his third start back from a shoulder injury after losing to Ernie Els in the second round at the Accenture Match Play. The Englishman has a terrific record at this event, finishing no worse than T5 (2012) in his last three visits to PGA National. He’s a safe pick to get you on the scoreboard this week.

Hideki Matsuyama (13): may be making his first appearance at PGA National but you’d be brave to overlook him. The Japanese sensation, who celebrates his 22nd birthday this week, already has five top-25 finishes in six starts in his first full season on the PGA Tour, including top-fives at the Frys.com and Phoenix Open. You only have to look at the fright Matsuyama gave Graeme McDowell at the Accenture Match Play to know this kid is the real deal.

Charles Howell III (9.5): one of the PGA Tour’s most consistent cheque-earners, Howell already boasts six top-10 finishes this season and has missed the cut just once in 10 starts. That’s a promising sign for Fantasy captains.

Billy Horschel (11): comes to Florida after pushing eventual champion Jason Day to the 22nd hole in their second round match at the Accenture Match Play. The 27-year-old tied for 46th here last year but that included a disastrous third round of 81. He’s a terrific putter who should thrive on the tricky Bermuda greens.

Chris Kirk (10.5): ranks fourth in FedEx points this season after scoring his second career win at the McGladrey Classic in November. He also boasts a second at the Sony Open in Hawaii.

Y.E. Yang (8): while he hasn’t seriously contended for a few years now, this is an event the South Korean clearly thrives at. Yang won here in 2009, finished second to Rory Sabbatini in 2011 and then T18 last year which was his best result of the season.

Matt Jones (9): the Australian has been in consistent form this year, making the cut at each of his past seven events with a best of T12 at the Phoenix Open. He finished in the top-20 here last year and has a best of T4 in 2008 behind Ernie Els.

Click here to register your team for Captain’s Picks.