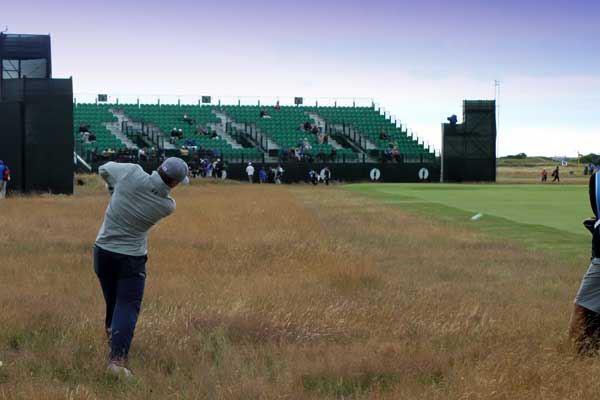 Credit where credit’s due though: they do provide plenty of entertainment throughout the golfing season for us weekend warriors to marvel at.

But let’s be honest; for every 350 yard drive, every wedge shot that lands like a butterfly with sore feet before spinning back to the hole, and every 3-foot par putt holed as if it was as easy as breathing, there’s more than a tinge of jealousy on our part…even if we don’t like to admit it!

The one thing we do have in common the world’s best players though? We’re human…and that means they too hit crappy shots every now and again.

With that in mind, here are some clips from 2014. Clips of the world’s best players, these sporting titans, doing their best to make us all feel better about our golf games…

Tiger’s enforced (through injury) break from golf ended at his own event, the Hero World Challenge.

His general play and his “new old swing” drew plenty of positive comments. His short game however? Well…Tiger duffed nine chips in all and most of ‘em looked a lot like this…

Next time you hit the big ball 1st when chipping; just remember it happens to the very best!

At the time of this shot, Stacey Lewis was top of the World Golf Rankings. And speaking of tops…

It’s embarrassing enough when it happens to us in the Monthly Medal with no one looking on so we feel for you Stacey!

Ernie’s opening drive at this year’s Open Championship clocked a fan on the head. Clearly shaken by the incident, The Big Easy then went on to three-putt from a foot and in doing so provided us amateurs with a valuable lesson.

No matter how good you are, the nonchalant, back-of-the-putter attempt born of frustration is NEVER a good idea!

Have you ever seen a tour pro move a golf ball such a short distance with not one but TWO shots?

The Attack of the Divot

We aren’t sure what the name of this golfer is, but when you take a divot with your practice swing and it hits your ball, costing you a shot, it makes golfers everywhere secretly smile inside.

And if you thought that was a one-off…it happened last year to Justin Rose too!

Part of what separates tour pros and us average Joes is solid course management. While more often than not, we’ll just blindly whack away without a thought for the possible consequences, the pros really know how to think their way around the course. But…sometimes they get it wrong too…

One part of the professional game that we amateurs can certainly relate to is excuse making. If you are prone to the odd excuse on the golf course, don’t fret; the top boys do it too…

You’re not fooling anyone Webb!

While the world’s best players can often seem like cool, calm, calculated characters while on the golf course, there are the rare moments when they come over all Monthly-Medalish!

One such moment arrived when Justin Rose hit the tee shot below and immediately got a taste of what we hackers feel almost every time we hit a driver…sheer PANIC!

Why there? We know how you feel Justin.

While we can only dream of piping driver after driver 350 yards, straight down the middle of the fairway, there is a part of Rory’s game we saw at the St Andrews Old Course that many of us probably do have in the locker. Tough chip. Be inventive. Take out the putter. Cock it right up!

We’d like to send our thanks to all of the world class golfers above for taking the time to make us all feel better about our games…it’s much appreciated!