Furyk in front at East Lake

Jim Furyk leads the field into the final day’s play of the FedEx Cup Tour Championship after a third round 70 gave the American a one-shot lead over South Africa’s Retief Goosen and England’s Luke Donald.

Furyk, who was controversially thrown out of the opening The Barclays event for missing his Pro-Am tee-time on the day before, carded a round that included two birdies, but also two bogeys, with all the scores coming on the homeward nine holes. But it was still enough to hold a slender advantage over the chasing pack, and put Furyk in line for the $10million bonus prize.

Furyk, along with both Goosen and Donald, each still hold chances of winning the FedExCup and claim its $10 million bonus by winning the Tour Championship event, which carries its own $1.35 million first prize for the victor.

But they are not the only three who could lift the FedEx Cup and there are plenty of potential scenarios which could occur over the final day.

Retief Goosen carded five birdies, but bogeyed the last enroute to a third-round 66, while Luke Donald finished with a 71, after reaching the turn in 1-under par. The Englishman was undone by a double-bogey at the par-5 15th hole after finding the sand with his third shot, before blasting to 12 feet and then a shocking three-putt.

Goosen and Donald are two ahead of Australia’s Geoff Ogilvy, who dropped down the leaderboard slightly following a round of 72. After starting bogey-double bogey, Ogilvy had clawed back two shots by the turn after back-to-back birdies at the 4th and 5th holes, but ran up a similar sequence at the 13th and 14th holes, before finishing with another birdie.

Paul Casey and Kevin Na are also both in the hunt, after both players shot 69 to share fifth spot on 4-under par. 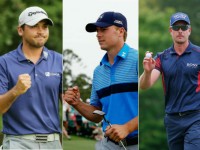 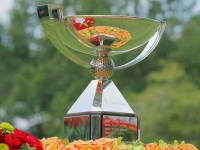