United States’ Jim Furyk survived a late wobble and some inclement weather during the fourth round of the Tour Championship, to claim victory and collect a £7million bonus in addition to the tournament winner’s purse of £1.35million.

Furyk went into the final day’s play holding a slender one-stroke lead over two-time US Open champion Retief Goosen and England’s Luke Donald, but held off the field courtesy of a closing round of 70, to finish on 8-under par at a wet East Lake golf course in Atlanta, Georgia.

Luke Donald also carded a round of 70 to claim sole possession of second place, with Goosen a further shot back in third. Paul Casey and Nick Watney shared fourth place on 5-under par.

Due to the weather forecast in the Atlanta area, the tee times for the final round were brought forward, but that didn’t stop play from being interrupted for almost two hours, and the final holes were played in near torrential-rain.

Furyk was three shots in front heading into the final three holes and suffered a late wobble as bogeys on the 16th and 17th coupled with a Luke Donald birdie on the 17th hole – courtesy of a 90-foot chip-in – meant Furyk would play the final hole with the leanest of margins. And after finding the bunker from the tee, Donald might well have been thinking of a playoff.

But Furyk had saved par on every visit to the sand throughout the tournament, and he wasn’t about to let that statistic be ruined and splashed out to just two feet before holing the par putt. After fishing the ball out of the hole, he threw it into the stands and punched the air in delight.

Both Furyk and Donald will now head straight to the UK and The Celtic Manor Resort, ahead of next week’s Ryder Cup match.

Furyk became the first player outside the FedEx Cup top 10 to lift the series, after starting the Tour Championship in 11th place. His position in the rankings can be attributed to his missing out on The Barclays – the series opening event – after oversleeping and missing out on his ProAm tee-off time.

But this morning he’ll awake with seven million reasons to be cheerful.

Matt Kuchar, who went into the Tour Champion ranked first in the standings, finished down the field but took second place overall in the standings to collect $3million, while Luke Donald took third spot overall and pocketed a $2million bonus. 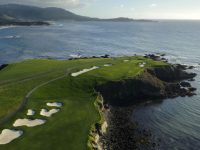