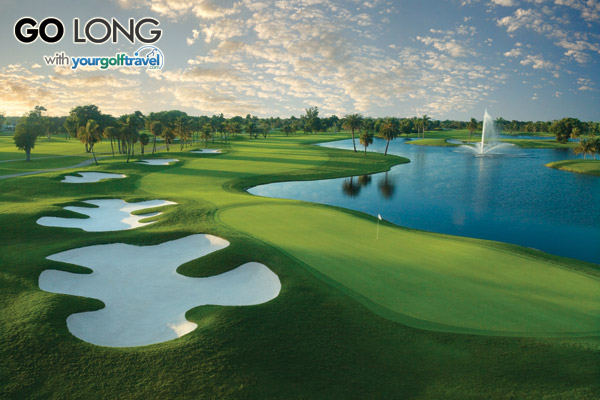 Go Long – Emulate the feats of the Pros in Miami

One of golf’s greatest charms is the fact that a weekend golfer like you or me can tee up on exactly the same courses as touring professionals.

What park cricketer can say they’ve strolled to the crease at Lords? How many lower league footballers get the chance to bag a goal at Wembley?

But players of all levels can walk in the footsteps of the pros and attempt to emulate those famous moments we’ve seen on television.

If you’re seeking some big-league courses to add to your golfing CV, then Miami is a destination you simply must consider.

Boasting both Doral – home to the legendary TPC Blue Monster course – and the PGA National, with its five championship tracks, Miami is arguably one of the premier golf holiday destinations in the world.

As one of the most iconic courses on the PGA Tour, the famed Blue Monster is one for the bucket list of any avid golfer.

A view towards the eighth green at Doral, hugged by the infamous ‘Blue Monster’ – the lake from which the course derives its nickname.

The Trump National Doral resort has recently undergone a full-blown redesign, from its five stunning courses right through to the 693 guestrooms and clubhouse.

The course, which plays host to the World Golf Championships–Cadillac Championship, has been expanded from the 7,334 yards it played in 2013 to 7,450 yards in 2014.

Only four holes on the Doral layout didn’t receive some kind of makeover – but rest easy golf fans. New owner Donald Trump hasn’t messed with No. 18, the infamous finishing hole which gives touring pros heart palpitations when the wind is blowing with the WGC Cadillac title on the line late on Sunday afternoon.

Just over an hour’s drive north of Doral lies the PGA National Resort and Spa and its Champion course – the current home of the Honda Classic, and previous host to the 1983 Ryder Cup and 1987 PGA Championship.

A must-play on any keen golfer’s list, The Champion features the Jack Nicklaus-designed Bear Trap, a stretch of three demanding holes considered one of Florida’s most notable golf challenges.

With no shortage of hazards, the Jack Nicklaus-redesigned Champion course at PGA National resort provides a stern test for golfers.

In addition to The Champion, there are four other Tour-worthy courses, all with their lush, rolling fairways, immaculately manicured greens and… water, water everywhere.

Doral and PGA National are world class golfing venues. But the true lure lies in their rich history, including some of the most magical moments witnessed on the PGA Tour.

Click here to re-live a dozen of the greatest moments at the TPC Blue Monster and PGA National.