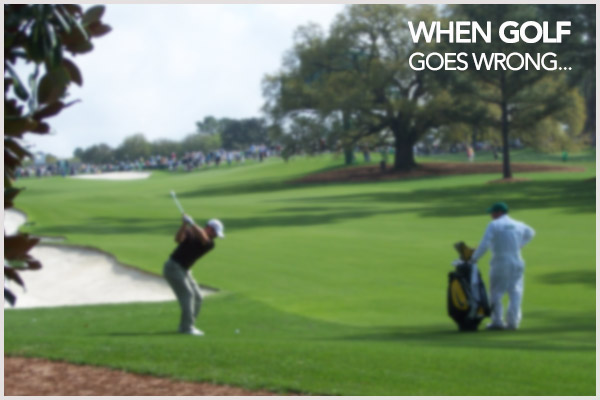 Golf as it shouldn’t be – the worst shots in golf

Golf can be a pressure cooker when approaching the final holes on Sunday. While many can harness this stress and turn it into greatness there are a few who have played a game more monthly medal than major Championship. Here is a look back at some of the worst shots in golf that have cost some of the best players in the game major championships.

1. Rory McIlroy 10th hole Masters 2011
As a fellow Irishman, it was particular difficult to watch Rory McIlroy’s 10th hole at The Masters in 2011. Having lead for three rounds, the 24-year-old had gotten off to a shaky start, making the turn at 1-over 37. Still, he had a one-shot lead as he stepped to the 10th tee. That’s where it all unravelled. He pulled his tee shot into the trees left of the fairway, and the ball ricocheted between two of the club’s famous cabins. McIlroy had no choice but to punch it back out, but he still had a long shot to the green. He yanked it left of the green, near a scoreboard, then banged a wedge off a tree limb. He finally chipped it onto the green, barely. Two putts left him with a 7, and sent him tumbling down the leader board and thus, kissed goodbye his chances of landing his first major championship. However, he showed tremendous resolve to come back just a few months later and win the US Open and a PGA Championship followed in 2012. His calamitous season has been well documented but hopefully he gets back to basics and fulfils the potential we all know he possesses.

2. Colin Montgomerie 2006 US Open 18th hole
Colin Montgomerie had only Colin Montgomerie to blame. He came to The US Open in June 2006 with four second-place finishes in majors. This time, though, he pretty much beat himself with one awful swing. Montgomerie started his final round at Winged Foot tied for fourth, three shots off the lead. Four hours later, he stood in the 18th fairway tied for the lead with Phil Mickelson at 4 over par, 172 yards from what surely could be no worse than a playoff. Then, inexplicably, a 7-iron got away from him and found the deep rough right of the green. Montgomerie ended up with double bogey, and another runner-up finish. Montgomerie lost the 1994 US Open to Ernie Els in a three-way playoff and the 1995 PGA Championship in a playoff with Steve Elkington. He also was runner-up to Els in the 1997 US Open and to Tiger Woods in the 2005 Open at St. Andrews in Scotland. At his age, time would seem to be running out to shake the mantle of best golfer never to win a major…but you never know in golf.

3. Jean Van de Velde 1999 Open Championship 18th hole
Jean Van de Velde held a three-stroke lead when he arrived at the final hole of the 1999 Open. Carnoustie’s 18th is one of the most difficult holes in golf. Out-of-bounds hugs the left side, while the Barry Burn runs down the right side and cuts in front of the green. Instead of playing conservatively, Van de Velde hit driver and caught a good break when his tee shot landed right of the burn. Van de Velde eschewed the opportunity to lay up with his second shot as well, selecting a 2-iron. And that’s when all hell broke loose. His ball flew into the grandstand right of the green and took one of the worst bounces in major Championship history; it ricocheted back across the creek into knee-high rough. Van de Velde dumped the next shot into the burn and waded in to try to play it before deciding to take a drop. He’d eventually make a 10-footer for triple-bogey 7 to get into a playoff with 1997 champ Justin Leonard and Paul Lawrie. Lawrie, a scot who shot a final-round 67, won the playoff, but every collapse in tournament golf is now known as “pulling a Van de Velde.”

4. Calcavecchia Kiawah Island 1991 Ryder Cup
Known as the “War on the Shore”, the 1991 Ryder Cup was intense from the start. The Americans failed to gain the cup in the three previous competitions, something team USA wasn’t used to (at that time, anyway) and didn’t like. A lot of tough rhetoric preceded this Ryder Cup, and tension was heavy throughout. Calcavecchia’s singles match was against Colin Montgomerie, and Calc looked in great shape: he was 4-up with four to play. A win or even just a halve by Calc on any of the final four holes would win the cup for America. You know what happened: Calcavecchia lost all four holes and halved the match. The stretch included a tee shot on the par-3 17th at the ocean course that was very close to a shank, Calcavecchia’s ball plopping into the water. That happened after Monty, who was struggling himself, had already put his own tee ball in the water. Amazingly, Calcavecchia reached the 17th green with a chance to halve the hole (and win the Ryder cup) with a double bogey – but he missed the 2-foot putt. Thinking he had lost the Ryder cup for team USA, Calcavecchia walked away from the 18th green, down onto the beach, sank into the sand and cried. His blushes were saved when Bernhard Langer missed a 6-foot par putt on the final hole of the cup, halving with Hale Irwin and allowing the US to win back the cup. This Ryder Cup at Kiawah Island was one which will be remembered for both great and terrible golf.

5. Hunter Mahan duff 2010 Ryder Cup 17th hole
Celtic Manor was the scene of this crime and while it was McDowell’s excellent golf that will be remembered, Mahan’s little mishap on 17 was the final nail in the coffin. He had made just one birdie in his round but battled to get the match 1 down as it became apparent it was going to mean something. But at the 16th hole, McDowell drained a sliding 20-footer for birdie that shook the Wales countryside and will long be the highlight of the northern Irishman’s career, even with a US Open trophy sitting on his mantel. The putt put McDowell 2 up with two to play. All Mahan was being asked to do was win the last two holes. Certainly Mahan didn’t play well that day to put himself in that position. Had he been able to keep the match closer, those last two holes might not have been fraught with so much angst. It was nearly impossible to think he’d beat McDowell on two straight holes when he’d won just three in the previous 16 and yet there is still a feeling that Mahan lost that Ryder cup (in truth, the Americans made a remarkable comeback to put Mahan in that position, winning six matches and halving two; they had gone 0-5-1 the day prior in the rain-plagued third session.) Still, that disappointment had Mahan wanting back on this year’s team. He went 4-1 at last year’s Presidents Cup and was looking for a chance at redemption. But it didn’t happen and perhaps unfairly, Mahan’s duff at the 17th will be remembered as the shot that handed Europe the Ryder Cup.