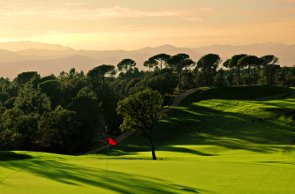 As the end of the professional golf season draws to a close we can cast our minds back to a year of highs and lows on Tour and certainly, for many of us in Britain, a particular highlight will be the performance of a young Tom Lewis during the opening round of the Open Championship. Questions concerning how long Tom would keep his amateur status were flying around all week but Lewis kept his promise and recently turned out for the Great Britain & Ireland team at the Walker Cup. He has now turned pro though and will have only a handful of events to earn enough money to avoid the European Tour Qualifying School which is exactly where countless golfers will be heading in order to secure their futures on tour.

The hopes and dreams of some Europe’s finest young golfers will again be realised – or dashed – when The European Tour Qualifying School is staged at the PGA Catalunya Resort near Girona, northern Spain, for the fourth successive year this December.

PGA Catalunya is now widely recognised as one of Europe’s finest golfing venues, and the Qualifying School has produced a number of noteworthy winners in recent years, not least England’s Simon Khan who, six months after winning the Final Stage in 2009, captured the 2010 BMW PGA Championship title at Wentworth Golf Club. The nail-biting final stage six-round event is to be held this year from December 10-15, over the resort’s two challenging golf courses, the Tour and the Stadium, with the top-30 and ties earning their playing cards for The 2012 European Tour.

Competitors will play the Stadium and Tour courses twice each over the first four days, with the Stadium Course being used by the remaining 70 and ties for the final two rounds.

You too can experience all that PGA Catalunya has to offer on a Spanish golf holiday. With a number of exclusive, unbeatable golf break packages on offer you could be jetting off to sunny Spain and the PGA Catalunya for as little as £169! Golf holiday packages include golf on the two stunning championship courses and bed and breakfast at one of two ideally located hotels, the Park Hotel San Jorge and the Platjapark Hotel.

So now that the winter winds are heading our way why not book a winter golf break in Spain and play the courses the future stars of golf will be hoping to secure their futures on come December?

For information on Spanish golf holidays and other packages for top European golf break destinations please visit www.yourgolftravel.com or call 0800 043 6644.