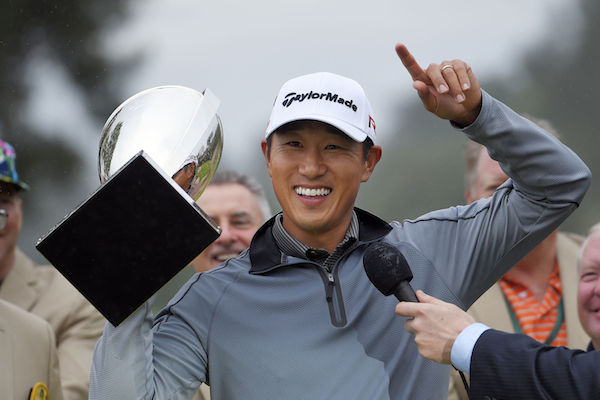 By Dan FoleyFebruary 23, 2015No Comments

James Hahn hit an ubleiviable 25-foot birdie putt to clinch his first ever PGA Tour title on the third playoff hole at the Northern Trust Open.

The 33-year-old put himself in contention for the tie-breaker by carding a two-under 69 in the final round, with Dustin Johnson missing a 10-foot birdie attempt for the win and Englishman Paul Casey joining them on six under overall.

All three parred the four-shot 18th in the first extra hole and then Casey fell away when his 15-foot birdie shot missed on the 10th hole.

Hahn sunk his long-range birdie on the par-three 14th hole and then was unable to watch as Johnson prepared a 12-foot shot to extend the playoff.

The American first realised he had missed via the reaction of the crowd and he was almost lost for words afterwards at the Riviera Country Club.

“This is amazing,” Hahn told the PGA Tour website. “I never would have thought I would win this tournament.”

Spaniard Sergio Garcia was one shot short of getting involved in the playoff, as he tied for fourth on five under, but he was frustrated after letting a one-shot lead slip on the 17th, with a bogey-bogey finish, even if he felt he did not deserve to win.

“I’ve always been truthful to myself and I didn’t deserve to win this week. It’s as simple as that,” Garcia said.

“It caught up with me on the last six, seven holes. It was already a good effort for me to have a chance. Unfortunately, it’s never nice to finish bogey-bogey. But I can’t really be disappointed because I didn’t play well enough.”

One man who will have cause to be disappointed is South African Retief Goosen, who had been a mainstay at the top of the leaderboard all weekend only to fall two shots off the pace on the last day.

The 46-year-old, who has not won a title for almost six years, had a miserable round with a double bogey and two bogeys on the front nine, followed by another double bogey on the 13th and a trio of bogeys in the next three holes after that.

Goosen only managed to stay as high as he did on the leaderboard after ending on back-to-back birdies with his final two holes to finish with a four over 75.