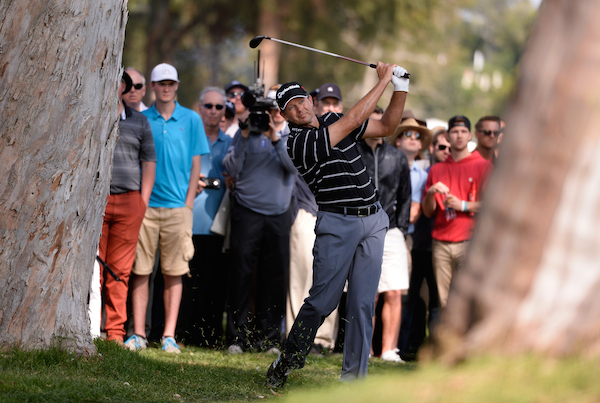 By Dan FoleyFebruary 22, 2015No Comments

South African Retief Goosen leads the Northern Trust Open for the third day in a row and has a great opportunity to win his first title in five years.

The 46-year-old took a six-way share of the clubhouse lead after day one, before going out in front on his own on Friday at the Riviera Country Club. He has now extended that to two shots going into the final day after birdies on the 16th and 17th holes saw him recover from hitting four bogeys on the back nine to card 69.

“This would be an awesome win,” Goosen told the PGA Tour website. “It’s been a while since I had a chance to win. Yeah, this would … feel like a U.S. Open, a third U.S. Open, for me winning this week. I’m going to give it my all tomorrow and fight hard and we’ll see what happens.”

MORE: WHY GOOSEN COULD WIN THE US MASTERS NOW

Goosen said after day two it would be interesting to see how his nerves held out after suddenly finding himself in contention again and they were certainly tested in California.

The world number 220 looked to be cruising after picking up three shots on a faultless front nine, but after that he was pushed to the brink, hitting tree shots on the 12th and 13th holes for bogeys as well as dropping shots at 10 and 15.

“It wasn’t easy out there for me,” Goosen added. “Mentally, I had to work hard to try and stay positive and focused. But I’m still in the lead, so that’s a good place to be. Just try and play solid tomorrow and keep the putter warm and see what happens.”

Canadian Graham DeLaet is the closest contender to Goosen, two shots back on six under, while Spaniard Sergio Garcia is part of a four-strong group three shots off the pace.

Englishman Paul Casey dropped two shots further behind Goosen to sit five off the pace on three under after carding a disappointing par-71 round, which included a double-bogey on the eighth hole.