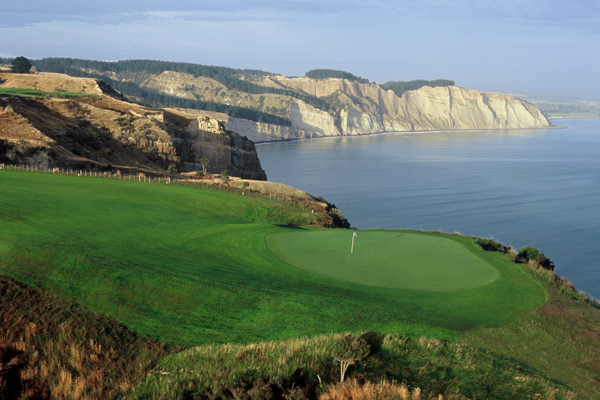 Members of the England Cricket team, who are currently touring New Zealand, took the chance to play some golf at the stunning Cape Kidnappers during some time away from training and while a round at such a golf course would be enough to entertain the majority of golfers, the bowling trio of Graeme Swann, James Anderson and Stuart Broad couldn’t resist some fun and games while waiting on one of the tees overlooking Hawke’s Bay.

Describing the landscape on the North Island’s most spectacular golf course is difficult with words alone; the back nine features a handful of holes that are laid out across what can best be described as fingers of land that are demarcated by cavernous gorges and gullies that fall hundreds of feet down into Hawke’s Bay. The drop is so dramatic in fact, that golfers have described the waves crashing into the bay as looking like ripples on a pond!

Anyway…back to the cricketers and the shenanigans!

The video below, which is courtesy of Stuart Broad’s phone, captures Swann using James Anderson’s new, custom fit driver to attempt to volley a golf ball off the edge of one of the course’s famous cliffs. As you might expect from an international cricketer, Swanny had more than enough hand eye coordination to make contact with the ball. Unfortunately for him and James Anderson, he failed to take into account the difference in length between a cricket bat and a golf club…