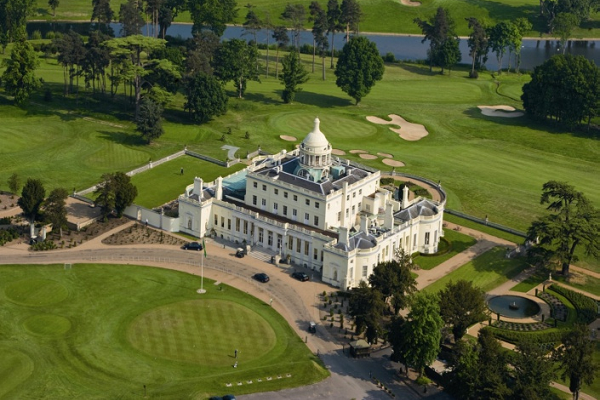 The Heroes Celebrity Golf Day has been going from strength to strength over the last few years since its inception in 2010. The 2012 event, which was held at the famous Stoke Park in Buckinghamshire, was as successful as ever with hordes of celebrity and amateur golfers alike, turning out to show their support for our servicemen and women.

The 2012 event kicked off with Coffee and Bacon Rolls followed by a driving range clinic with European Tour player, Simon Kahn; the perfect way to inspire great play out on the course!

After a bit of fun at the golf trick show players were off; armed with state of the art V-Par scoring systems. A shotgun start signalled the start of play on the Colt and Allison nines and players did battle over 18 holes to record the highest stableford score possible with the best two scores counting on each hole.

The weather in 2012 was hardly ideal but even heavy rain couldn’t dampen the spirits of those in attendance including the likes of England Rugby legend, Jason Leonard, who hailed it as one of the best golf days of the year. Others who have attended over the years include the likes of Dan Walker of the BBC, DJ Spoony, Sam Torrance, Mel Reid and ex England Cricket Captain, Michael Vaughan.

The Heroes Celebrity Golf Day provides a top class golfing experience in world class surroundings, all the while raising significant contributions to Help for Heroes, an official charity of Your Golf Travel.

Help For Heroes was launched in October 2007 by a group of friends and service relations who wished to do something to help the wounded coming back from Afghanistan and Iraq by providing direct, practical support to wounded, injured and sick Service personnel, veterans, and their families. Golf is in fact one of the many activities used by Help for Heroes to help with the rehabilitation of such personnel.

Past events have benefitted from impressive military presences and 2013 will be no different. The Heroes National Celebrity Golf Day 2013 at Stoke Park will have a strong military theme and as the beginning of play will be signaled by a shotgun start, the start will be prepared and fired by military personnel.

Golf is followed by drinks and a gala dinner where golfers and guests – there is additional seating for the dinner so golfers can be joined after play is finished – have the chance to bid in an auction where past lots have included The Legends Set of Golf Clubs; a set of clubs signed by the game’s greats such as Tiger Woods, Jack Nicklaus and Gary Player.

If celebrities, golf and a superb gala dinner, coupled with clinics and shows throughout the day sounds like it appeals to you then do your bit for our injured servicemen and women by signing up to play in the 2013 event. Spaces for this special golfing day are limited to only 24 Four Balls and in past years the popularity of the event has soared, meaning you may have to act quickly to in order to secure your spot.

Click here to register for the 2013 Heroes Celebrity Golf Day.