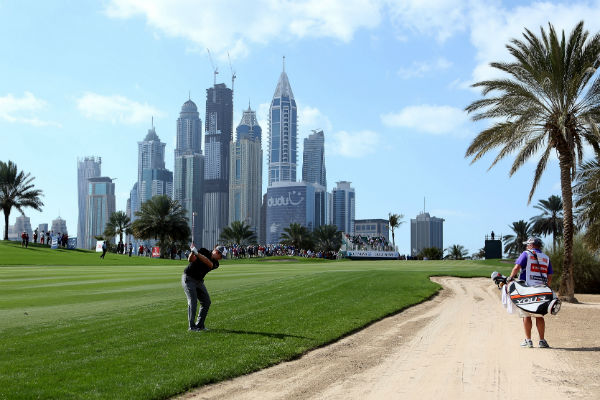 Join the world’s best golfers at the Dubai Desert Classic

By Richard ForresterDecember 11, 2014No Comments

Ever wondered what it would be like to mix with the pros as they prepare for a tournament? Not only that, one where there’s a $2.65 million purse on offer? And the added bonus of getting a tan in January? Now’s your chance to mix with the biggest names in golf and stay at the official players’ hotel in Dubai as they play in the Omega Dubai Desert Classic.

Not only that, you can eat breakfast with the players before watching the excitement of the final two days and fly in your own clubs to play on three of Dubai’s beautiful courses with Your Golf Travel.

Among the challengers is Scottish golfer Stephen Gallacher, who will look to create history again as he aims to win the tournament for the third time in a row when the European Tour event begins on 29 January 2015.

Gallacher became the first person ever to successfully defend his title earlier this year when his -16 score was enough to hold off a stunning final round of 66 from Emiliano Grillo.

The Dubai Desert Classic, played on the Majlis Course at Emirates Golf Club, was founded in 1989 and has featured stellar major winners from Tiger Woods and Rory McIlroy to Seve Ballesteros and Fred Couples.

Stay with the players, watch the golf unravel and play on three courses in Dubai with this exclusive package from Your Golf Travel.

McIlroy is the youngest ever winner at the age of 19 and 273 days in 2009 and he will be looking for his second tournament win six years on.

Woods hasn’t endured his finest year by all means through injury and although he finished joint last with a level par score at the Hero World Challenge event, he will take huge confidence knowing he is 94-under-par for the 28 rounds that he has played on the Majlis course.

Built in the heart of the desert, the Majlis course has a reputation for being a testing layout for even the best golfers. Surrounded by dunes on the edge of the city of Dubai, Rose believes the 8th hole is one of his top nine favourite holes of all time.