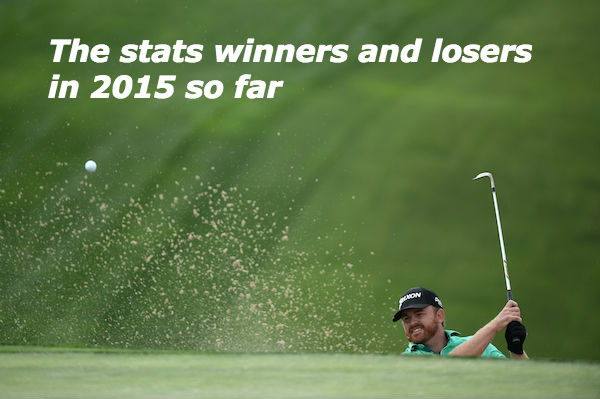 Lies, damned lies? How the stats stack up on the PGA Tour and European Tour

What’s in a number? In golf, a great deal of store is set by statistics, and they make fascinating reading. True, they often don’t give the full picture – Rory McIlroy‘s one of the best drivers in the world but because he may stray two inches off the fairway, his numbers suffer, even if he is 100 yards longer than his playing partner’s.

Well here’s a thing. Little-known Spanish rookie Pedro Oriol is booming it out there further than anyone else in the world, clocking a huge 320.5 yards for his average drive. Oriol got his card at last year’s Qualifying School so isn’t guaranteed many starts in 2015 – in fact he’s played in just two tournaments, but made the cut in both with an 11th in the Alfred Dunhill Championship his best finish. He’s more than seven yards longer off the tee than next-biggest hitter Brooks Koepka, who in his defence has already won on the PGA Tour this season.

And the worst: Scott Verplank at 259.4 yards. To be fair, he does now qualify for the senior tour.

Good old PGA Tour veteran David Toms leads the way in this category, landing on the fairway 214 times from 278 drives, or 76.98% of the time. So he’s getting himself in a decent position off the tee but has recorded just one top ten in six starts in the 2015 season. Might need to work on his approach play and putting. Just saying.

And the worst: China’s Wen-Chong Liang, with just 39.29% of drives finding the fairway. Fore right!

Most greens in regulation

A slightly skewed stat this early in the season, because it takes only one tournament with big greens that are easy to hit to change the complexion of the numbers. But what the hell, we’ve started now. And whaddya know, the best player in the world is top of this category. Yes, Rory McIlroy, with an astounding 86.1% of greens hit, is the straightest iron player in the world. (To be fair, Victor Dubuisson is also on this number but has played only four rounds compared to Rory’s 16). Hitting greens makes it a lot easier to in tournaments.

And the worst: it’s a tough slog for Troy Kelly this season, hitting just 50% of greens and missing 100% of cuts as a result.

There are umpteen different methodologies to measure this one (check out the pgatour.com website, which measures putting performance in no less than 95 ways) but we’re going with the straightforward putts per greens in regulation. And it’s Scot Marc Warren who leads the way, with a deeply impressive figure of just 1.647 over 18 rounds on the European Tour. Warren is a player on the up who may well win big in 2015 – you read it here first. Top player on the PGA Tour is Jason Day at 1.691.

And the worst: we’re dealing in decimal points here but even so, Richard McEvoy must be tearing his hair out at 1.907, which is only marginally better than club golfer standard.

Several players have registered 100% of sand saves this early in the season, so we’re highlighting the man who has made the most numerically – England’s Chris Paisley, who has got up and down 12 times from 12 attempts. Loves being in the sand, that lad.
The worst – technically it’s German Moritz Lampert with just two from 11 (18.2%) but special mention to India’s Anirban Lahiri, with only six from 23 (26%) sand saves but a victory to his name already this season.