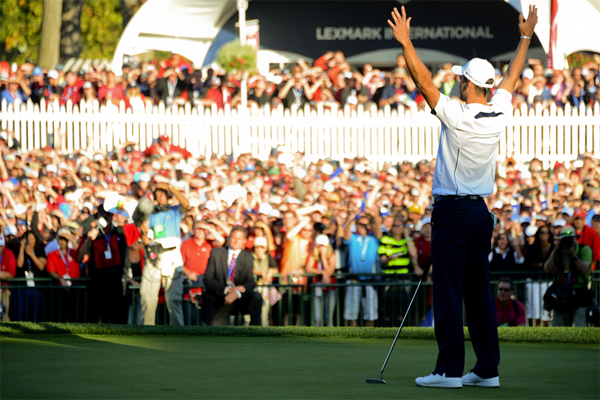 By Richard ForresterJanuary 16, 2015No Comments

Martin Kaymer will head into the third round of the Abu Dhabi HSBC Golf Championship with a one-shot lead despite Rory McIlroy’s first career hole in one.

Kaymer, a three time winner of the tournament, carded five birdies and no bogeys to shoot a five-under-par 67 on Friday to move him to -13 for the tournament, with McIlroy two shots off the pace in third.

The German was one shot clear of Belgium’s Thomas Pieters, who missed the chance to stay tied for first place after a bogey on his final hole of the day.

World number one McIlroy climbed five places to third, thanks in part to the first tournament hole in one of his professional career on the par-three 15th.

The Northern Irishman also carded five birdies and a bogey to register 66 and go 11 under for the event.

McIlroy’s playing partner Rickie Fowler did not enjoy as much luck as the reigning Open and PGA champion. The American had a triple bogey after finding the deep rough on the eighth before two more bogeys on the back nine left him on two under, just above the projected cut.

England’s James Morrison was in fourth place on nine under following his second round of 67, while France’s Alexander Levy and Australia’s Richard Green were a stroke further back in a tie for fifth.

“I guess the greens, I can read them very well and my stroke always feels well when I come here,” Kaymer told Sky Sports 4 after completing his round.

“Again, today, I didn’t miss many fairways, which gives you the opportunity to go for a lot of flags, and to be honest I really believe the golf course plays two or three shots tougher in the morning than in the afternoon, because once you miss the fairway, you’re in that thick, wet grass and then it’s almost impossible to get home in two on the par fours.

“So therefore, I was very happy to shoot five under today.”

Starting on the back nine, US Open champion Kaymer superbly putted from the edge of the green on the 12th and then made another birdie at the 13th.

He saved par on the 16th despite finding a greenside bunker with his approach and then overcame an errant tee shot into the rough to take four on the par-five 18th.

Another wayward approach at the start of the front nine left him in another bunker, but he magnificently chipped in to move to 12 under overall.

Kaymer was struggling to make further inroads, although it looked like he would end a run of four successive pars when he was left a birdie putt from a few feet on the sixth.

The chance went begging, though, and he also missed another birdie opportunity on his next hole, albeit from a greater distance, when his putt drifted to the right.

Kaymer ended his run of pars on his penultimate hole but missed another birdie chance on the ninth when his putt from the edge of the green went right.

Nevertheless, it meant he enjoyed a bogey-free round as he signed for a 67 that moved him clear of the chasing pack.

Pieters, who started on the back nine, gradually clawed back the ground to Kaymer and scored six birdies, but a bogey on the last meant he ended the second day one shot off the lead.

McIlroy also found himself in a good position after his first ever hole in one from 177 yards on the 15th was added to his five birdies, with a bogey on the sixth the only blot on his copybook.

“I felt really good. I went to the range yesterday and worked on a couple of things and drove the ball much better today, which you need to round here,” he said. “Ball-striking wise, I couldn’t really fault it.

“I was playing really well from tee to green. I felt like I was hitting some good putts as well, but they just weren’t dropping. Overall I’m not going to complain with a 66 as it’s a great position to be in going into the weekend.”

Speaking about the hole in one, McIlroy added: “It definitely made up for the previous two holes. It was a perfect number, a straight downwind 177. As soon as it left the bat it looked like it had a chance. It’s my first one ever in competition as a pro, and obviously beers are on me tonight.”