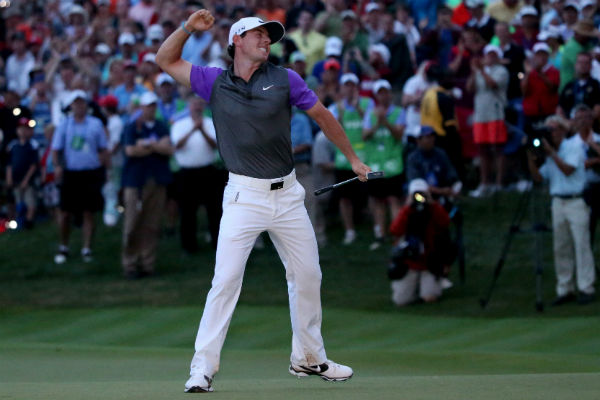 By Richard ForresterJanuary 14, 2015No Comments

World number one Rory McIlroy is looking to build on his successes last year by securing his first victory at Augusta in April.

The Northern Irishman will play at the Abu Dhabi HSBC Golf Championship in his first appearance of 2015 but it is the Masters which he will really want to target as he seeks to become only the sixth man to complete a career grand slam of majors.

McIlroy won the Open and PGA Championship last year, two of his four wins worldwide, as well as helping Europe retain the Ryder Cup and returning to the top of the world rankings.

That made him the man his rivals all want to beat and it is a position he is more than comfortable with as he starts a schedule which he hopes will see him pull on the coveted green jacket at Augusta in April.

“It’s always a good sign when other players are talking about you,” he told BBC Sport.

“I think with the performances that I put up last year that’s what happened. I feel that the way to continue to do that and have that so-called aura is to keep producing these performances consistently, so that’s the goal.

[frame_center src=”https://www.yourgolftravel.com/19th-hole/wp-content/uploads/2015/01/GolfersWithAllFourMajors_V3.jpg” width=”600″ height=”400″]If McIlroy can create history at the Masters, he will become the sixth player and first non-American to win all four majors. It took Gene Sarazen 13 years between 1922-1935 to win all four with his last coming at the Masters. Ben Hogan was second to join the list, taking him seven years and it gradually declined taking Gary Player six, Jack Nicklaus four and Tiger Woods three years. [/frame_center]

“It’s to get into contention as many times as possible, test your game under the heat of battle and see where you stand against everybody else. I obviously want to go into every golf tournament being the guy to beat and I want to be going into the Masters being that same guy.”

McIlroy added at a press conference in Abu Dhabi: “I know what to anticipate leading up to Augusta and for me it’s about trying to treat it the same way I have done and not put any more emphasis on it than there already is.

“It’s the first major of the year. People have been waiting for eight months for a major to come around. There’s so much build-up and hype going into Augusta anyway, so it’s just about making sure I’m as well prepared as I possibly can be going into that event. I feel like I’ve got a good routine and mental strategy going into majors now where I try not to let too much affect me.”

McIlroy has continued his habit of using the trip to the Emirates to set out his goals for the year.

There are seven in total, although the 25-year-old would not reveal what they are.

“Every year I fly here and I do a week or 10 days of preparation in Dubai before this tournament and I write my goals down on the back of my boarding pass, put it in my wallet and memorise them, then I don’t look at them until the end of the year,” he said.

“So in my back pocket, in my wallet, is a boarding pass with my goals for this year. I don’t really want to share them with anyone else as they are just my little goals and I’ll try and achieve those and take that boarding pass out at the end of the year and see how well I’ve done.

“Over the Christmas period I had my first chance to really look back and reflect on the year and even watch a few of the highlights of some of the tournaments that I won, so it was nice to reflect, but I feel 2014 has really set me up for another great year.”