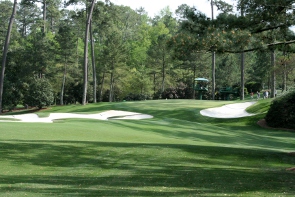 Rory McIlroy shot a second round 69 to take a two-shot lead into the weekend’s play at the US Masters in Atlanta, Georgia. However, the young Irishman will no doubt be casting anxious glances at the leaderboard, and in particular the presence of Tiger Woods – who elected to make a move on Friday, rather than his customary Saturday.

After being bogey-free on day one, McIlroy nearly made it two successive days without a dropped shot, and came out of the blocks quickly with a birdie on his second hole. Two more followed on the front nine, and McIlroy entered Amen Corner three-under for the day. A bogey on the difficult par-3 12th knocked the wind from his sails but he regained the dropped shot on the next, before making pars the rest of the way home.

McIlroy, 21, leads by two shots over fellow youngster – but two years’ senior, Australian Jason Day; who shot a best-of-the-day 64. Day had been level-par after his first round, but blitzed the Augusta National course with three birdies on the front nine, and came home with five more on the homeward half to chase down the Northern Irishman.

However, anxious glances down the leaderboard sees former World number one and four-time former Masters champion Tiger Woods move menacingly into the hunt. Following a solid opening round of 71, Woods opened his second round bogey-birdie-bogey, before three birdies in four holes – and one more bogey – saw him turn in 35. Coming home, however, Woods really found his touch to scorch home in 31 shots for a round of 66 – 6 under par – and move to within 3 of the leader.

Woods was joined by Korean, KJ Choi; the former weightlifter adding a round of 70 to his opening 67. A bogey on the last hole was a disappointing end to the Korean’s round.

Joint overnight leader, Spaniard Alvaro Quiros shot a 1-over par 73 to drop off the lead, but the big-hitting Spaniard finished on 6-under par, just four off the lead with Australian, Geoff Ogilvy. Ogilvy carded a second successive round of 69.

And Lee Westwood showed he shouldn’t be written off in his quest for a first major title with a round of 67 to move to 5-under par. Westwood, who led into the final day here in 2010, was joined on 5-under by former champion Fred Couples, as well as by Rickie Fowler, Ricky Barnes and 2009 US PGA Champion, YE Yang.

The YourGolfTravel tipster picks will have to up their game if they are to be involved in the finish. Phil Mickelson spearheads the challenge, but the defending champion is eight shots back after a level-par second round, and will be looking for a repeat of his Shell Houston Open win, where he shot 16-under in his last 36 holes.

Bubba Watson closed on level-par for the tournament after a one-under 71 and is ten back. However, Watson came from out of the clouds to challenge the US PGA last year, so there’s some hope yet for the big-hitting left-hander.

Anthony Kim, however, wasn’t at his best, and despite a battling 73 – Kim was 5-over through 11 holes, it wasn’t enough to keep him in the tournament and he finished outside the cut.

The cut fell at 1-over par, and some big names were eliminated from the weekend. Perhaps most notable was world number one Martin Kaymer. The German had failed in three previous attempts to reach the weekend’s play at Augusta and continued that poor statistic – a level-par 72 adding to his opening 78.

With Kaymer missing the cut, any one of Tiger Woods, Lee Westwood, Phil Mickelson and Luke Donald could take over in the No. 1 spot in the Official World Golf Ranking with a victory on Sunday.