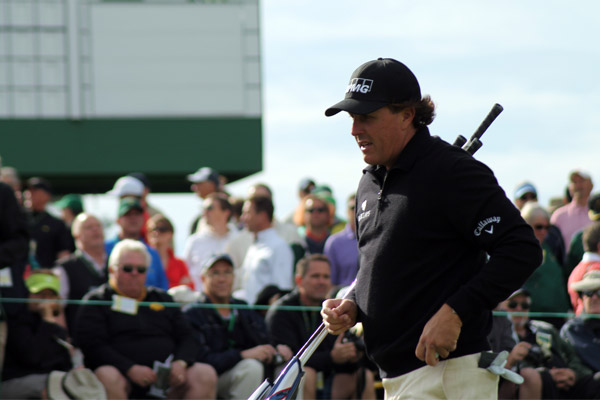 A lot was made of Phil Mickelson’s decision not to carry a driver throughout last week’s Open Championship but it proved to be an inspired choice as Lefty marched his way to his 5th major championship victory after a stunning final round 66.

His driverless yet peerless performance on the fast and furious Muirfield links was not the first time Phil the Thrill has raised eyebrows with his equipment selection leading into a major championship. Starting with his masterful performance at Muirfield, sans driver, we thought we’d have a look at the unusual equipment choices made by the new world number 2 when heading into golf’s most important events. Some work out and some don’t but whatever the outcome you’re always guaranteed excitement and entertainment when Lefty’s in the running!

This year’s Champion Golfer of the Year became so after again fiddling with his set of clubs, opting for no driver, but rather super hot 3 wood as the club he would use to administer his mightiest blows. The same club was in the bag at the US Open a month ago but this time Mickelson did the business on the final day.

Before the 3 wood that won him the Open, Phil went with something that had all but been forgotten in the world of golf, a 2 wood, at the Masters. During consultation with his club makers, Phil indicated he wanted a modern day 2 wood that would go as far as a driver and as straight as a 3 wood and they came back with what became known as the Phrankenwood! Unfortunately for Phil the new club didn’t inspire him to Masters title number 4. In fact, despite the Phrankenwood helping him to finish 6th in Driving Distance and just inside the top 10 in driving accuracy, Mickelson had his worst ever Masters, finishing in a tie for 54th.

All players have their own way of warming up for a major championship and Mickelson likes to play a tournament the week before each one. At the 2006 BellSouth Classic eagle-eyed golf fans spotted two drivers in Lefty’s bag. The theory was that he could work the ball both left and right without altering his swing. Comfortable hitting a cut shot with his everyday driver, Phil had to alter his swing path to hit a draw when he needed to and this didn’t sit well with him. An inch longer than standard and with a lower centre of gravity, along with different internal weights, the new driver had the desired effect and after winning the BellSouth Classic by a country mile, he would go on to claim his second Green Jacket a week later.

Torrey Pines – also known as the personal playground of Tiger Woods – weighed in as the longest ever US Open layout when the 2008 championship rolled around so when Lefty elected to leave his driver out of his bag, heads were turned. The fact that he couldn’t find the fairway over the 1st couple of days with the 3 wood he had selected to be his primary weapon simply compounded his mistake. Phil put the driver back in the bag for the weekend but that wasn’t enough to stop Tiger Woods and his broken leg claiming victory.