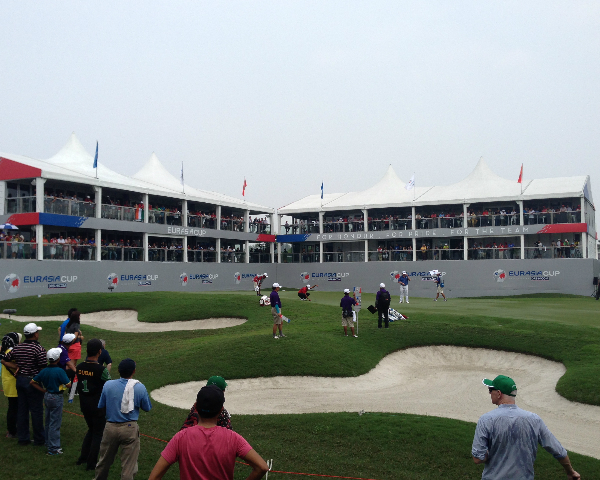 The EurAsia Cup is BACK!!! On January 15th 2016, the EurAsia Cup returns to Malaysia for the second edition, with Team Europe captained by YGT Ambassador Darren Clarke and Team Asia by India’s most successful tour player, Jeev Milkha Singh.  I thought I would tell you about my own personal experience at the 2014 EurAsia Cup. I was living in Malaysia at the time and was lucky enough to be in Kuala Lumpur for the first ever EurAsia Cup, known as the Ryder Cup between Europe and Asia. As a huge golfing fan myself, I knew I wanted to be there. I straight away bought myself a EurAsia Cup ticket, which was held at the stunning Glenmarie Golf & Country Club.

Team Europe was captained by Miguel Angel Jiminez, with Team Asia led by Thongchai Jaidee. There were some big names from the European and Asian Tours including the likes of Graeme McDowell, Thomas Bjorn and Asian Tour stars Kiradech Aphibarnrat and Siddikur Rahman.

As I was walking around the course, following several matches you could really feel the high energy amongst the crowd. The atmosphere by the 18th green was electric, as the final matches were coming to a close. Local fans and fans from around the world gathered in large numbers to see the final moments of the EurAsia Cup which ended in a friendly tie with both teams finishing on 10 points each. The event was a huge success, hence the return of the 2016 edition this coming week.

Malaysia is already confirmed as the host for the 2018 EurAsia Cup at the Glenmarie Golf and Country Club. The tournament received great TV coverage in 2014 and is very well received by local fans. The EurAsia Cup is seen as the perfect platform to build and grow the game in Asia, attracting potential Asian Tour stars.

The 2016 EurAsia Cup is only days away, Captain Clarke has a strong team lined up including Ryder Cup stars Ian Poulter, Victor Dubuisson, and fellow YGT Ambassador Lee Westwood. We wish Captain Clarke the best of luck as himself and his team head to Malaysia.