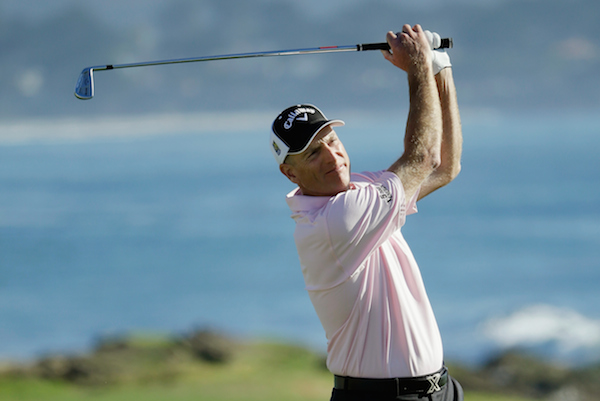 By Dan FoleyFebruary 15, 2015No Comments

Jim Furyk played an incredible back nine the on the third day of the AT&T Pebble Beach National Pro-Am to card 63 and take the lead going into the final day.

The former US Open champion produced nine birdies, seven of them in the last 10 holes, to take over at the head of the field on 18 under par.

Furyk starts today a shot clear of overnight leaders Matt Jones and Brandt Snedeker, who managed 67s, meaning the 44-year-old – competing for the first time since the Ryder Cup in September – is in a strong position to end a winless drought of more than four years.

Jones looked in control of the California contest as he birdied six of the first seven holes in the third round – but his progress was checked by two bogeys.

The leading European after the third round was Marcel Siem, who matched Furyk’s 63 to move to 12 under par, six shots off the lead. Ireland’s Shane Lowry was alongside the German after a 67.

England’s Brian Davis and Ian Poulter were on five under after rounds of 71 and 73 respectively. They were joined by John Daly, whose challenged has faltered since his opening round of seven under – he could only manage a 73 in the third round.

Ireland’s Padraig Harrington was four under and England’s Greg Owen three under – and it was a tournament to forget for Ireland’s Paul McGinley, whose third round 76 leaves him on 10 over.