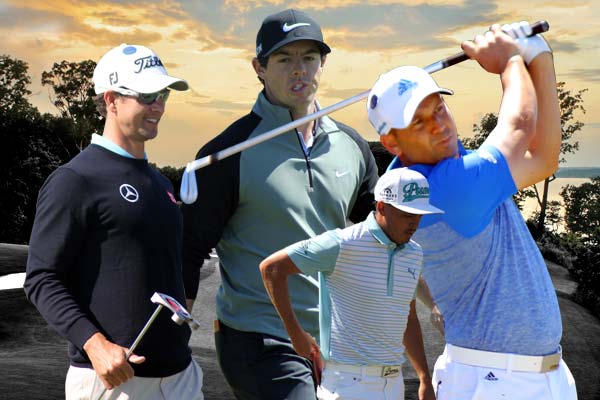 The world’s best golfers will converge on Valhalla in Kentucky today for the final major championship of the season, the PGA Championship.

All eyes will be on red-hot Rory McIlroy, as well as Tiger Woods who has made a dramatic last minute decision to play in the event following his withdrawal during the final round of last week’s WGC Bridgestone Invitational.

While it’s hard to look past Rory for the win, such is the quality of his recent golf, there are other players out there who have a great chance of getting their hands on the iconic Wanamaker trophy. Let’s have a look at the potential movers and shakers at Valhalla…

THE COURSE: At 7,458 yards and with the rough up, Valhalla will require long, straight hitting from the tee. Players will certainly have their work cut out trying to emulate Tiger’s (and Bob May’s) record setting score from 2000. Should it rain – extreme heat is more likely throughout the week – the course could play even longer, which plays into the hands of the likes of Rory and Adam Scott. Expect the bombers to carry a distinct advantage.

If it wasn’t for McIlroy’s amazing play since bagging the win at the BMW PGA Championship at Wentworth (he’s not finished out of the top 25 in an event since then and has won the Open Championship and WGC Bridgestone Invitational in recent weeks!), Sergio Garcia might well be the favourite going into the final major of the year.

Always one of the best ball strikers on tour, the Spaniard also has his putting boots on these days and is leading the PGA Tour in Scoring Average for the season. Sergio’s consistency has been impressive and he’s really been knocking on the door recently, finishing 2nd in each of his last three events.

Seemingly Sergio has difficulty with getting his nose across the line when in promising positions. If he can banish these demons, maybe Garcia will finally land his maiden major championship.

Since winning the Crowne Plaza Invitational in May, Scott has posted a T4 at Memorial, T9 at the US Open and finished T5 at The Open, an event in which Scotty got the rough end of the draw (Scott played in high winds that Rory and co didn’t have to battle during their early rounds), making his performance all the more impressive. We were sure Scott would win at Firestone last week…he didn’t…but his tied 8th finish wasn’t exactly shameful! Valhalla is a ball striker’s course and the man with one of the best swings in the game certainly falls into that category.

If Scotty can get it rolling with his “putter”, don’t be surprised if he adds to his major championship tally.

ONE TO WATCH: Rickie Fowler

Rickie has been the form man in the majors this year, finishing tied 5th in The Masters and 2nd in both the US Open and Open Championship. Chuck an 8th place finish at last week’s Bridgestone Invitational into the mix, as well as raft of other top 10 finishes this season and you’ve got a player riding high on confidence with an appetite for the biggest stages in golf.

Since working with Butch Harmon, Rickie has certainly come on as a golfer and might finally add to his solitary PGA Tour win with maiden major victory.

JB Holmes has had a more than respectable season on the PGA Tour, having been forced to spend time away from the game due following brain surgery in late 2011.

He’s climbed from 242nd in the World Golf Rankings to 68th, thanks in large part to his win at the Wells Fargo Championship in April and a pair of top 10 finishes. Holmes played well at this year’s US Open, proving he can cut it when the going gets tough and, as a local boy, has played Valhalla more than most, especially since it tweaked in 2008.

A lot of people are looking to a long hitter for victory at Valhalla due to the considerable length of the Kentucky layout, and few have more bang for their buck than JB.

Should Holmes drive the ball well – he’ll know where to miss if he doesn’t too – and brings his short game, the Kentucky crowd might just get the winner they all want.

BUT IN REALITY…IT’S HARD TO LOOK PAST RORY!

We know we’ve put Sergio as the “Best Bet” for this week’s PGA Championship, but did you watch any of the Open Championship? Or the Bridgestone Invitational? That’s explanation enough for this pick we think!

Since parting ways with Caroline Wozniacki earlier this year, Rors has seemingly found focus on the golf course and has been by far the best player in the world over the last few weeks. No less than 6 top 10 finishes preceded Rory’s wins at Royal Liverpool and Firestone and while not many people win three events in a row, not many people bag three majors by their mid twenties either!

Rory may not have seen much of Valhalla – this is his first visit to the Kentucky venue – but driving it 350 and in the fairway works pretty much everywhere!