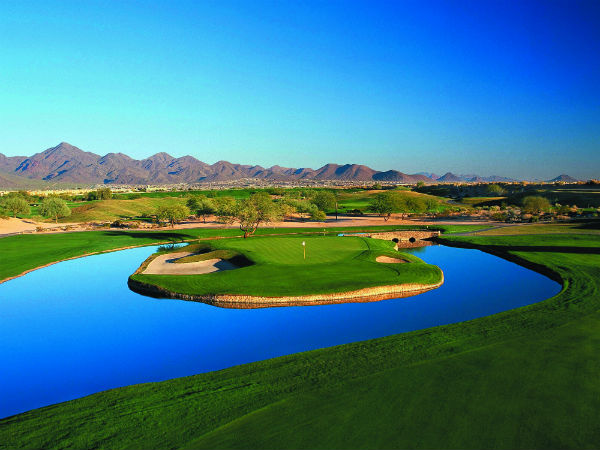 By Nick MartinJanuary 31, 2017No Comments

After a windy week in La Jolla for the Farmers Insurance Open at Torrey Pines, the PGA Tour heads down south to Arizona for the annual Waste Management Phoenix Open.  This is one of the most popular golf tournaments in the world attracting some of the PGA Tour’s biggest crowds. In fact in 2016, the tournament broke a new record for most attendees in a single day, 201,003! Now that is what you call A LOT of people!

It also falls on the same weekend as the Super Bowl, a pretty big deal for sporting fans! We can’t forget the iconic Par 3 16th at TPC Scottsdale, that is known as the LOUDEST hole in golf and offers stadium like seating with a capacity of over 20,000.

Get to know TPC Scottsdale

TPC Scottsdale has been home of the Waste Management Phoenix Open since 1987 and before this, the tournament was held at the Arizona Country Club and the Phoenix Country Club.

There are two championship courses at TPC Scottsdale, but the WM Phoenix Open is held on the Stadium Course. The course was designed by renowned golf course architects Tom Weiskopf and Jay Morrish who both have an impressive resume of courses around the world including Troon Golf Scottsdale, Loch Lomond, Quail Hollow Golf Club and The Ocean Club in the Bahamas.

The Stadium Course is a par 71 and measures at 7261 Yards from the championship tees, so is still a test even for the longer hitters on tour. It is one of the finest courses in Phoenix, and a popular favourite amongst PGA Tour professionals.

The WM Phoenix Open initially named the Arizona Open was first played in 1932. It was won by Ralph Guldahl with a score of 1 under par. He took home a cheque of $600. If we fast forward to 2017, take a look at the difference…….

Phil and Mark are two out of 4 golfers to have won the Phoenix Open three times. The other two include Arnold Palmer who won the tournament on three consecutive years from 1961 to 1963 and Gene Litter known as “Gene the Machine” for his smooth and steady golf swing.

The LOUDEST Hole in Golf

The Par 3 16th! It may only be a straightforward 162 Yard hole, but it is so much more than just that. It is arguably the most iconic par 3 in golf including the loudest hole in golf. It is dubbed the “Coliseum of Golf” because of its stadium like amphitheatre.

The 16th has a capacity of over 20,000 and with the amount of noise generated, you might as well be at the Super Bowl. Expect plenty of cheering and lots of drinking. Many fans head to the Phoenix Open just to experience the 16th hole atmosphere. If I had to choose any hole in golf to go and be a spectator, the Stadium Course Par 3 16th would definitely be the place! 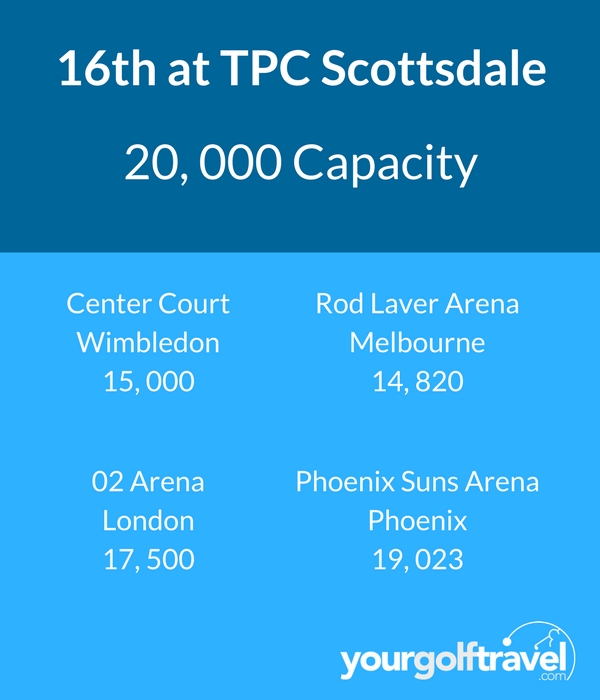 Who DO OUR YGT “PUNDITS” think will come out on top in Phoenix?

With a lot of talk about Jordan being good friends with Justin Thomas and how this has helped him on his way to incredible golf this season, I’m backing Jordan to come back with a competitive edge and show golf similar to 2015 in order to beat his friend. Although, Spieth missed the Farmers Insurance Open last week, he isn’t coming into this event with a lack of practice as just two weeks ago he finished 3rd in the Sony Open and the week before that he finished tied 3rd in the Tournament of Champions so he’s coming into this week competition ready and looking for a Win.

I’d imagine there will be plenty of people lumping on the likes of Hideki Matsuyama and Justin Thomas who have both been on red hot streaks in the last few weeks and months, and despite slipping to number 6 in the World Golf rankings, Jordan Spieth’s run of T6, T3 and 3 in his last three starts will have plenty looking to him for a solid finish too. I’m going to ignore all of that though and back Rickie Fowler to come good this week.

Fowler came close to winning in Phoenix in 2015 (eventually losing to Matsuyama in a playoff) but in truth, he was desperately unlucky that year when he hit his tee shot through the green and into the drink on the driveable par 4 17th. Rickie hit an absolute corker which 9 times out of 10 would come to rest nicely in the middle of the green, but this time it happened to take an incredibly hard bounce and take off like a rocket upon landing, racing into the water lurking behind the green. The probable birdie his tee shot deserved turned quickly into a bogey to Matsuyama’s birdie, a playoff ensued and that as they say was that.

Fowler has blown hot and cold in recent months but he seems to enjoy desert golf. TPC Scottsdale will be a very different test than what was facing the players at Torrey Pines last week, so I’m hoping Rickie bounces back from his missed cut there to play well in the party atmosphere in Phoenix.

Whilst so far this year the headlines have been taken by the up and coming stars of the PGA Tour such as Adam Hadwin and Justin Thomas for their superb rounds of 59, I feel this week is the week for some of the tour veterans to reclaim the limelight. Phil Mickelson is never too far from the top of the leader board and after a T-21 at the Career Building Challenge a couples of weeks back and a T-14 last week at Torrey Pines, the short game wizard is building up to something special. The book makers however, have only given him an outside chance of winning with odds of 22/1 but his recent run of form this year suggests he will definitely be in the mix when it comes to Sunday afternoon.

Whilst I don’t expect Rahm to continue his success at Torrey Pines and get another win, he does look like someone who will be in the mix come Sunday in Phoenix. Rahm finished in a tie for 5th in this event as an amateur in 2015, so clearly knows the course well and will also be sure to receive some home support, courtesy of his 2016 graduation from Arizona State University. Rahm looks the real deal and many are tipping him for an appearance at The 2018 Ryder Cup, if he continues to make the shots like he did last week, he’ll be one of the first names on Bjorn’s team sheet.

This week I am not going to be my usual self and go for a complete outsider, instead, I’m going for the solid American Brooks Koepka. He is one of the PGA Tour’s up and coming stars and he had a great end to 2016 by making the USA Ryder Cup Team. His first tournament back in 2017 was last week at Torrey Pines and although he did not make the cut he did show signs of great golf. In my book he is one of the top Americans with a chance of major but looking ahead to the Phoenix Open this week, I’ve got a good feeling Brooks will be top of the leaderboard come Sunday afternoon.

If you fancy heading to Arizona for your next USA golf holiday be sure to get in touch with Your Golf Travel and we can get the ball rolling. Don’t forget that on all long haul golf holidays you can enjoy FREE golf club carriage with British Airways.