Princes Golf Club – Escape for a weekend on the Links 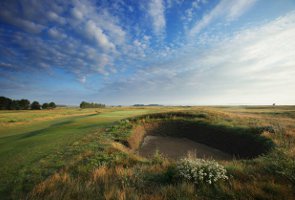 Sitting in the office one day in late July with the sun streaming in through the window and The Open Championship on in the background I must confess I had one of those afternoons where my body was still at my desk but my mind had teed off!

Cue an email to my golfing buddies suggesting a golfing jaunt to enjoy some classic links golf somewhere…anywhere within the UK or Ireland. You know…one of those emails that goes around, generates some interest and then falls flat as people realise they have too much on at work and at home etc, etc and so on and so forth.

Except this email was different…we were determined to play some championship links golf as we were all glued to the action at Royal Lytham & St Anne’s from start to finish and also fancied and change from the day in day out parkland golf we have become accustomed to at home. The debate started on where exactly we should head and quickly, due to financial restrictions and the last minute nature of our golf break, we decided England was the best bet as being situated in and around London allowed us to drive to most of the top class links courses fairly easily.

As you would expect the usual names were tossed into the hat with the courses on the Open Championship rota featuring heavily and others such as Saunton, Burnham & Berrow and Royal North Devon following close behind. Between us however, we had played almost all of these courses and then, following countless recommendations from colleagues we decided to head South East to the rugged Kent coastline and Princes Golf Club, which is just a couple of hours down the M2…honestly the drive’s a cinch and you have escaped the stresses and strains of the city and everyday life before you know it!

While some are slightly further inland than others, all 27 holes at Princes are just a stone’s throw from the North Sea and present a true test of links golf.

Princes is part of ‘Kent’s Great Triumvirate” – in association with Royal Cinque Ports and the mighty Royal St George’s – and while some may view it as the runt of the litter, I can assure you it has plenty in the locker to give even the most talented of golfers a real beating!

The 27 holes at Prince’s are now used for Open Championship qualifying, but the golf course has in the past hosted the Open Championship proper, underlining the fact that it is one of the United Kingdom’s best kept secrets. Henry Cotton and Gene Sarazen are not only among the game’s greatest names, but are also at the head of the lengthy line of Prince’s admirers; among the accolades these golfing legends bestowed were “the greatest links course” and “Britain’s finest course”. While I myself find it difficult to nail down the best links course I have ever played, I have to say I was impressed with what Princes had to offer.

The layout itself, no matter what combination of nine hole loops you play, is a classic seaside course in character, reflecting the inherent features of the local terrain. Much of the original course was destroyed during World War II but Sir Guy Campbell and John Morrison were commissioned to restore the course using the humps, bumps and hollows created by the Kent coastline’s myriad of sand dunes. Amazingly they were able to save 17 of the original greens to be used in the existing 27 hole layout which, when the wind gets up, presents a considerable challenge to golfers of all abilities.

Raised greens are a classic feature of links golf courses and make for some interesting situations should you miss the green with your approach.

Prince’s, like its visiting golfers, is always at the mercy of the elements, and the character of the golf course can alter dramatically with the wind. We happened to be playing it in, let’s say, forceful winds that made scoring difficult to say the least. Links golf however, especially on such a course as Princes, is enjoyable just for the sheer challenge. Our favourite was the Shore Course but golfers of different abilities might disagree as it was the most difficult of the lot. On all three nines the saying “Drive for show and putt for dough” doesn’t actually apply. Sure you need a tidy short game on any golf course but thanks to the knee high rough, which was boasting a particularly lush base thanks to the high rain fall in 2012, simply getting the ball in play is the most important thing to do around Princes. From there you can play golf any way you see fit. Fly it high or bump it low; shape it on the wind or use the natural contours of the course; Princes, like any classic links, gives you options galore. This is pure links golf, and is without doubt one of the country’s brightest gems.

But what of the accommodation?

Well, Princes is situated just a short drive from the charming seaside towns of Deal and Sandwich, both are less than 10 minutes away in the car, and as such there are a number of ways you could plan your golf break. We opted for the convenient option of The Lodge at Princes which was the most pleasant surprise of the trip. The Lodge offers accommodation of the highest quality and the apartments are ideal for a golf break away with friends. Our apartment featured two twin rooms separated by a stylish and well equipped living area and the bathrooms were lavish to say the least.

The Lodge at Princes sits proudly overlooking Princes and Royal St Georges which is right next door. The beach and the sea are also within a pitching wedge of the front door!

As well as the accommodation, The Lodge offers all you would expect of a top class modern hotel. There is a bar which is a great place for weary golfers to enjoy a drink after a day on the links; although we mustered up some energy and headed into Sandwich where we enjoyed a few beers in the local pubs before grabbing a fish supper and heading back to the comfort of our apartment.

In addition to a comfortable Lounge, the Bar, Terrace and a Snooker Room, The Lodge also offers a modern, contemporary dining experience in The Brasserie on the Bay. We may have skipped dinner here but the menu looked amazing and the food we enjoyed for breakfast on the morning of our second day was excellent. We also spoke to several locals who, upon asking where we were staying, raved about the food served here…perhaps that fish supper was the wrong choice!

Located adjacent to the club’s main entrance, overlooking the 13th green at Royal St George’s, The Lodge has transformed Prince’s into the focus for golf breaks in Kent…its Royal neighbours may well have to take a back seat form now on!

For more information on Kent Golf Tours and other UK & Ireland Golf Breaks please visit www.yourgolftravel.com or call free on 0800 043 6644.