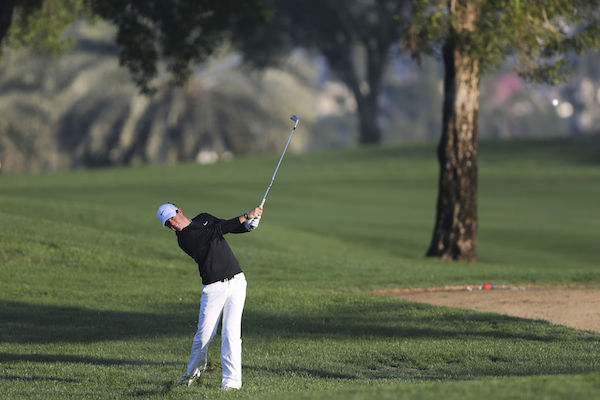 Rory McIlroy made a statement of intent on day one of the Dubai Desert Classic as he looks to convert his good form into victory at the Emirates Golf Club.

McIlroy has finished second in his last three events and will hope to go one better at the course where he had his first professional win six years ago.

The world number one is clearly comfortable around the lay-out and, after starting on the ninth, got off to a flying start with birdies on his first two holes and another on the 18th got him to the turn in 34.

He picked up another shot on three and was four under through 13 holes, four behind early leader Nicolas Colsaerts.

The big-hitting Belgian also started on the back nine and a hat trick of birdies from 11 to 13 and two more on 17 and 18 saw him set a blistering pace. Further birdies followed on one, three and seven and Colsaerts was eight under with two to play.

England’s Andy Sullivan was a shot back through 13 after five birdies and an eagle on the par-five 18th with McIlroy then leading an intimidating looking group on four under.

McIlroy’s playing partner Martin Kaymer was also four off the lead alongside Lee Westwood who had played 12 holes. Ryder Cup star Stephen Gallacher, South African Jake Roos and German Maximilian Kiefer were also all on four under midway through their back nines.

Colsaerts dropped a shot on the ninth to card a 65 and set the clubhouse lead at seven under but McIlroy was on the charge with back-to-back birdies on five and six getting him to six under.

Westwood also picked up a shot on five to move to five under while Kaymer was another to birdie to fifth but he gave the shot back on six.

Another birdie from McIlroy on eight made it four in six holes and got him into share of the lead with Colsaerts and Sullivan with one to play. Two-time defending champion Gallacher birdied eight and nine to sign for a 66 and sits one shot back alongside Kieffer who birdied 13 and 14.

Colsaerts was pleased with his opening round but felt his driving, usually one of his major strengths, stopped him from going even lower.

“I feel very good, I was in the zone all day,” he told Sky Sports 4.
“I still felt like I left a few out there, I could have easily been 10 under today. It’s mixed feelings because I was hitting it wayward off the tee and then certain shots into the green I must have been looking like I was owning the place.”