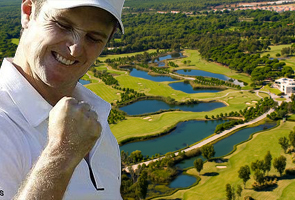 So the Turkish Airlines World Golf Final came to a head at the Antalya Golf Club in Belek this morning and while it wasn’t the final organisers, sponsors and many other onlookers wanted, with a lacklustre McIlroy crashing out in the group stages and Tiger narrowly being edged out by Justin Rose in the semi final, the form of Lee Westwood and Rose more than made up for the loss of the games two biggest stars.

Westwood may have been the favourite in many people’s eyes after his dazzling display yesterday which saw him go -17 through 36 holes but Rose has been in form all year, with a win at the WGC Cadillac Championship and securing a crucial Ryder Cup singles point against Phil Mickelson among his more notable achievements in 2012.

Rose would indeed go on to make 2012 even sweeter for himself by shooting a flawless 66 to beat Westwood and claim the title.

Both players were in fine form at Antalya, with neither player carding a bogey in the final, but Westwood reverted back to type and missed a string of good birdie chances throughout the round. This would prove to be the difference between the pair.

Rose – who had already beaten Westwood in the group stages – made a fast start by holing from 20 feet for a birdie on the first. Both players dropped shots at the par-3 5th hole, but Westwood wiped out the 1 shot deficit with a two-putt birdie at the par-5 7th. Rose responded on the very next hole though with an eight-foot birdie putt of his own before adding another at the par-4 10th to stretch his lead to two just after the half way point.

The Turkish Airlines World Golf Finals were played on the Sultan Course at Antalya Golf Club where players had to deal with fairways bordered by picturesque umbrella pines as well as countless water hazards.

The back nine was where Westwood’s inability to wave the wand was most evident as a hatful of birdie putts went by the wayside. It really must be frustrating knowing that, from tee to green, you are considerably better than almost any other player in the world but that you can’t make use of that skill set because of poor putting! His miss from 3 feet at the 13th was particularly poor and was the beginning of the end for the former world number one.

Rose gave Westy hope when he missed tiddler at the 16th but slammed the door shut on the 17th by holing a 20 footer when with Westwood comfortably inside him, looking as if he may close the gap to one going up the last.

Having seen Rose’s ball roll into the hole, Westwood again missed, leaving him requiring Rose to fall apart up the last to salvage any hope of taking home the $1.5m winner’s cheque.

To his credit, he knocked his approach to five feet and holed the putt to record a four-under-par 67, but Rose made no mistakes and carded a 66 to win the final by one shot.

For more information on Antalya Golf Club Holidays and other Turkish Golf Breaks please visit www.yourgolftravel.com or call free on 0800 043 6644.