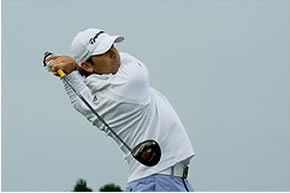 Sergio Garcia continued his rebirth back into the game’s elite with a gritty display to win the Andalucia Masters at Valderrama, beating compatriot Miguel Angel Jiminez by a solitary stroke.

After his demolition job last week at the Castello Masters, Garcia arrived at the venue where he has three-times finished as a runner-up, but made no mistake at the fourth time of asking; posting a level-par round of 71 to become the first Spaniard to win a strokeplay event over the course.

Jiminez had tied overnight leader Garcia early in the second round with birdies at the 2nd and 3rd holes, but found himself one behind his compatriot by the turn, after back-to-back losses at the sixth and seventh.

But on the homeward nine, Garcia first regained a share of the lead at the 11th hole, before taking the lead outright at the 13th when Jiminez made bogey. A birdie at the next gave Garcia a two-shot lead, and it became three when Jiminez dropped another shot behind at the 15th before staging a late rally with a pair of birdies at the 16th and 17th holes to cut the gap back to one shot.

Another birdie at the 18th hole looked likely when Jiménez found the fairway and then the green in two, but he left his 15-foot putt agonisingly short and Garcia, who had missed the putting surface at the last, held his nerve to get up-and down to claim a second successive triumph.

“It’s very, very special,” said Garcia afterwards. “Valderrama – I have so much history here and unfortunately it wasn’t as good as this until now!”

“I’m out of words. It’s been two amazing weeks. Miguel fought so hard and had some good chances coming in, 17 for eagle and 18 for birdie.”

“I wasn’t as good as probably the last 13 days, but we hung on and managed to pull through.”

“Ryder Cup years are always special for me, so hopefully we can make that team.”

Scot Richie Ramsay battled hard to match the two Spaniards, but will be left to rue a double-bogey five at the par-3 15th hole which halted his momentum just as he was looking to get involved in the finish. The Scot eventually finished 4-under par to claim third spot – one behind Jiminez.

Irishman Shane Lowry and England’s Steve Webster took fourth and fifth spots on the leaderboard, finishing 3-under par and 2-under par respectively.