Snedeker and Day lead at half-way in Deutsche Bank Championship

United States’ Brandt Snedeker and Australia’s Jason Day share top spot in the Deutsche Bank Championship on 12-under par and will take a one-shot lead into Sunday’s third round at TPC Boston.

Snedeker had a single dropped shot during his round of 64, and added eight birdies to his tally to add to his opening 66, while Day recorded an error-free 67 which saw back-to-back birdies on the 1st and 2nd holes, and the 17th and 18th holes.

Defending champion, Steve Stricker holed a bunker shot for birdie enroute to a bogey-free second round 68 to share sicth place with DJ Trahan on 9-under par, while there is an eleven-man tie for eighth place and 8-under par. The group includes Stewart Cink, the 2009 Open Champion at Turnberry and current US Masters champion Phil Mickelson, who enjoyed a hot day on the greens. Two-time 2010 US Tour winner Hunter Mahan, Vijay Singh and Zach Johnson are other notable names on the 8-under par mark.

Tiger Woods engaged top gear at just the right time to card a second round 65 and ensure his place in the final two rounds, after threatening to miss the cut following an opening 72. The current world number one carded an error-free round for the first time in over a year to move into a tie for 29th place after starting the day in 87th. His five-under par total still leaves him seven strokes off the pace however.

Padraig Harrington, who handed a European Ryder Cup pick last week by Colin Montgomerie, missed the cut and could now be eliminated from the Playoffs with a projected FedEx Cup position of 76. Only the top 70 in the rankings will progress to next week’s BMW Championship.

Other notable names to miss out include Ben Crane, Jeff Overton. Justin Rose and Anthony Kim. 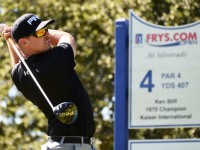 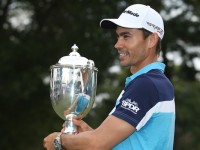