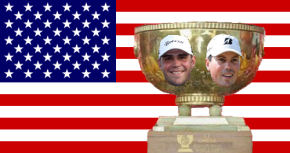 11 years on from their last triumph in the Omega Mission Hills World Cup, the United States once again got their hands on the trophy.

The team of Matt Kuchar and Gary Woodland combined for a final round 67 to become the first US winners of the World Cup since Tiger Woods and David Duval hoisted the trophy back in 2000. The final round score saw them finish on 24-under par and run out two shot winners over the Germany and England pairs.

With the Ireland duo of Rory McIlroy and Graeme McDowell hitting the skids in the final round, the United States made steady headway to take the lead, and although Germany and England both mounted challenges of their own, the American duo did enough to win.

The United States started with back-to-back birdies, and added another brace of gains at the sixth and seventh holes to take the lead. A dropped shot at the 11th hole opened the door to the chasing Germany and England teams, but the American pair responded with another pair of birdies at the 12th and 13th holes to regain the initiative and pars home from there proved enough for the win.

The German pair – Martin Kaymer and Alex Cejka – looked likely to challenge the lead early, turning just one shot off the lead. However, the birdies wouldn’t come for the pair, and their 69 wasn’t enough to overhaul the lead.

In contrast, after starting the final day eight shots off the lead the England pair of Ian Poulter and Justin Rose could do little except find birdies – signing for a 63, the best foursomes score of the week. Sadly for the England pair, it was a step too far to bridge the gap and overhaul the American duo.

Ireland’s bid for World Cup glory got off to a bumpy start; McIlroy missing from two-feet to bogey, and from that point they were struggling to recapture the form that had seen them blast into a two shot lead ahead of the final round. In the end, Ireland could only muster a level-par 72 and a share of fourth alongside the Netherlands pair of Robert-Jan Derksen and Joost Luiten, Scottish duo Stephen Gallacher and Martin Laird, and the Australian pair of Richard Green and Brendan Jones.

“We just didn’t have it out there today,” said McDowell afterwards. “We had no mojo, we didn’t make anything.  We knew what we had to do today. Our target was to go and shoot four under par and that’s exactly what we needed to do. We just couldn’t get it done.”

For Kuchar and Woodland, they join some great American names in golf’s World Cup history, including Jack Nicklaus, Tiger Woods and Arnold Palmer.

“We played phenomenal, especially today. It’s a tough format, and both of us picked each other up when the other one got in trouble. It was a good day.”

“To be able to walk through these halls and to see our pictures and our faces, this is just a fantastic resort. To be remembered here as World Cup Champions is a real honour.”