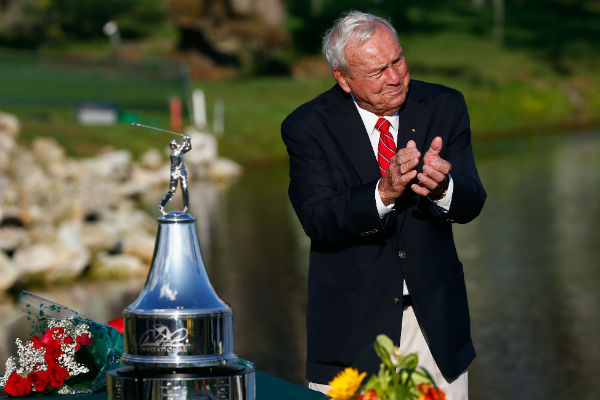 By Richard ForresterMarch 18, 2015No Comments

One of the greatest players of all time hosts this week’s tournament on the PGA Tour. Arnold Palmer, the man known simply as The King, generally gets his way, and when he said a few years ago that if Rory McIlroy didn’t play in his event he’d break his arm, the young Ulsterman took heed. Eventually.

McIlroy makes his debut at the terrific Bay Hill layout this week and goes in as a hot favourite. He is, after all, the world number one, winner of the last two majors and a winner on the European Tour already in 2015. But his US sojourn has not been so successful this year so far, and while he could easily decimate this field on a going week, there are one or two tiny doubts right now that he is driving the ball as well as he can. Of course, he may well have fixed that, but this field has great strength in depth who can take advantage of anyone slipping up.

Bay Hill has traditionally been one of the toughest tests on tour, although scoring improved when it became a par-72 having previously been a par-70. It’s long at 7,419 yards, so the bombers are at an advantage – although not exclusively: Ian Poulter is not the longest off the tee by any means but hasn’t been outside the top 21 in the last four years, coming third in 2012. He’s also (the odd shank aside) in a great vein of form.

Two players leap off the page, although there are a great many with chances. But the first we like is KEVIN NA. He’s had four top-15s in his last five starts at Bay Hill and has recorded top-tens in his first two starts on this year’s Florida Swing. Can be painfully slow to watch but at a best-priced 50-1 he can take all night as long as he brings home the bacon.

Second on our list is Rory’s buddie BROOKS KOEPKA. Now here’s a player with game, as the Americans like to say, and while Jordan Spieth is grabbing all the headlines as the Next Big Thing to emerge from the US, it’s our contention that Koepka is right up there with him. You can get a best price of 35-1 on him and he has all the attributes to do well here. He hits it a mile (he can be wild on occasion but the fairways have been widened this year) so will score on the par-5s, which is key, and putts well. He’s a Floridian native and attended Florida State University, so will know the track well. Not only that, he’s already shown this year, at the Phoenix Open, that he knows how to win.

It would be remiss of us not to mention the likes of Henrik Stenson, Bubba Watson and JB Holmes, who are all in terrific form, or course specialists Poulter and Keegan Bradley. But Na and Koepka will carry our cash.