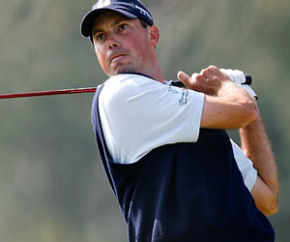 The PGA Tour heads to the Pete Dye-designed Harbour Town Links at Hilton Head, South Carolina for The Heritage. Jim Furyk defends the title he won in a playoff against Brian Davis, after the Englishman called a penalty on himself to gift the victory to the American player.

Hilton Head, despite being an immensely tough course, is one of the players’ favourites. It is a tight, tree-lined par-70 course with small, well-guarded Bermuda greens and the weather often plays a big role in determining the winner.

Jim Furyk is the defending champion and the man with one of the ugliest swings in golf is available around the 16/1 mark. Furyk has certainly never let his unorthodox swing get in the way of a fine career, and despite not being at the top of his game in 2011, his form in 2010 was worse before he won here! Furyk has some strong course form, and in addition to last season’s win he has also posted several top-5s here.

Luke Donald is the bookmaker favourite for the event at 9/1 and must have a solid chance this week. Donald ticks all the boxes required to win around this course, and has finished in the top three in each of the previous two seasons here. Add in top-10s in his last four starts, including his WGC-Accenture Match Play win and you can see why he’s tournament favourite. The big doubt with him is, as has been the case in years past, his ability to close out winning chances and I fear it may be a case of the same again this week.

Matt Kuchar has made the cut in every start he has made at Hilton Head, and despite an up-and-down showing at the US Masters is capable of winning this event if performing to his best. Kuchar has also made all 9 cuts so far this year, with six top-10 finishes among them, and it would be no surprise to see him in the shake up at 16/1.

Francesco Molinari hasn’t enjoyed the best of starts in his first full season on the PGA Tour, but his third at the recent WGC-Cadillac Championship at Doral showed he was finally hitting stride. The tight nature of Hilton Head will put a premium on accuracy which is a facet of Molinari’s game he excels at, and if he gets his putter working he’ll pose a threat to all at 33/1.

Australian Aaron Baddeley makes a lot of appeal this week at 22/1, and the player has been in terrific form in 2011. Three top-10s this season has included a win at Riviera in the Northern Trust Open and he is also a past winner over the course when earning the first of three PGA Tour victories here in 2006. He’s also finished in the top-10 twice since then and on current form, he could well be up to mounting a strong challenge.

Two wins and two top-15 finishes from four appearances in this event suggest Boo Weekley is massively overpriced at 80/1 for this event, despite a dip in form in 2011 following a solid start. However, Boo’s form followed a similar pattern last season, and it was around this time that he began to recapture some sparkle. His strong course form shouldn’t be overlooked despite his lack of recent form and he is well worth a second glance this week.