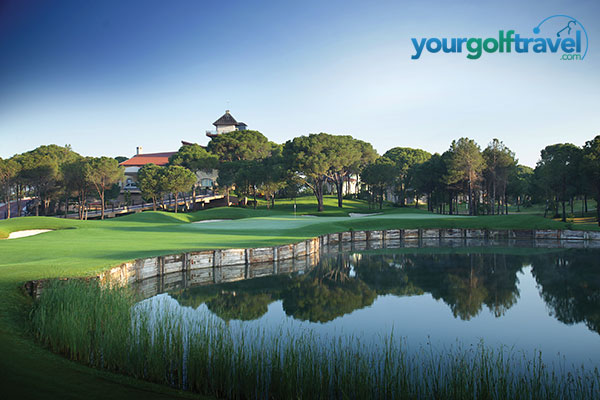 Turkey is a land of dramatic mountain ranges, bordered by stunning coastline and glittering seas, and bubbling with fascinating culture.

And thanks to rapid development along it’s southern coastline, Turkey has swiftly emerged as one of the hottest golf holiday destinations on the planet.

The Belek region, located some 30km east of the tourist hub of Antalya, is lined with an array of top-quality golf courses. Of the 14 finished at the time of writing, four have already earned a place on the Top 100 Courses in Europe list, including the pin-up for Turkish Golf: The Montgomerie Maxx Royal.

Belek’s Montgomerie Maxx Royal has secured hosting rights to the Turkish Airlines Open for 2014 and 2015.

Designed by its namesake, Ryder Cup legend and 2010 European Team captain, Colin Montgomerie; the course is carved through mature pines and along sandy ridges typical of Turkey’s gorgeous Mediterranean coastline. With a backdrop that includes stunning views of the Taurus Mountains, coupled with Belek’s heavenly climate, there are few more idyllic settings to enjoy a round of golf.

Many of you would have witnessed the fruits of Monty’s vision from the comfort of your lounge-rooms when the Maxx Royal staged the Turkish Airlines Open last November. The inaugural tournament was introduced as the penultimate event of the 2013 European Tour Final Series. It saw France’s Victor Dubuisson hold off Jamie Donaldson, Justin Rose and Tiger Woods to claim his maiden European Tour title.

Several players took to social media to sing praises of the golf course and the accompanying Maxx Royal Golf & Spa hotel, no doubt helping the resort’s cause in retaining the Turkish Airlines Open for at least the next two years.

The par 72 layout is characterised by colossal waste bunkers (which cover a total of seven hectares) and enormous, undulating greens, while water comes into play on nine of the 18 holes. As with all Montgomerie courses, Maxx Royal is set up to make you think before every swing. Much of the course offers risk vs. reward holes where decision making has a dramatic effect on the difficulty of the next shot. In the modern age where many course architects are focussed on challenging players through length, it’s refreshing to see Monty reward strategy and accuracy over brute strength and ignorance.

There are several great holes on the Maxx Royal, kicking off with the par-5 4th. Longer players may get their chance to reach the green in two with an accurate tee-shot. The hole demands a well judged approach – whether it’s your second or third – as an enormous lake will swallow any shot lacking in conviction. 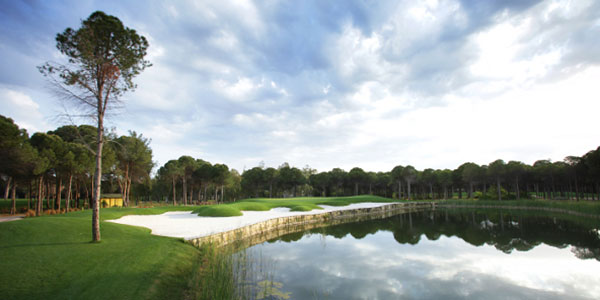 The picturesque 14th hole features one of eight lakes on the Montgomerie course.

The back nine kicks off with a beautiful little par-4, where a strategic tee shot that avoids the waste areas can leave you with a good view of the flag. The downhill second shot is to a green perfectly framed by the majestic pines.

But the signature hole is probably the doglegged par-5 13th, where two pine trees positioned in the middle of the fairway present the golfer with options. Take the Tiger line to the left for a better chance of carrying the waste bunker which splits the fairway for your second shot; or choose the easier line to the right, lay-up, and be faced with a more difficult approach to the green. This mentally demanding hole sums up the Maxx Royal perfectly, requiring sound decision making while testing all of one’s golfing skills.

While the course stretches to 7,100 yards from the plates, four sets of tee positions ensure it can be enjoyed by all standards of golfers. With Belek’s Mediterranean climate acting as a welcome ally to Monty’s meticulous team of greenskeepers, you’d be pressed to play on a better conditioned course this year. Visitors can expect pristine fairways, bunkers filled with fluffy white sand and greens that are fast and true – regardless of of the time of year.

The clubhouse tower, overlooking the 18th green, is a spectacular place to enjoy a cold beverage.

It’s not just the course which earns the admiration of guests to the Maxx Royal. The clubhouse is one of the most impressive in Turkey, boasting spectacular views of the golf course from its 30m high tower. The terrace that looks out over the final hole surely rates a mention among the finest 19th holes in the world, providing the perfect vantage point to enjoy a post-round pint of Efes or Tuborg.

Accompanied by the luxurious, five-star hotel – which features an array of international cuisine options, a decadent spa experience, a selection of pools and beaches, and even an adventure theme park – Maxx Royal is truly one of the world’s most comprehensive and premium holiday resorts. Throw in the fact that the hotel runs on an ultra all-inclusive board basis (all your food and drinks are included), and it’s easy to see why golf tourists are flocking in their droves to Belek for a taste of the Monty.