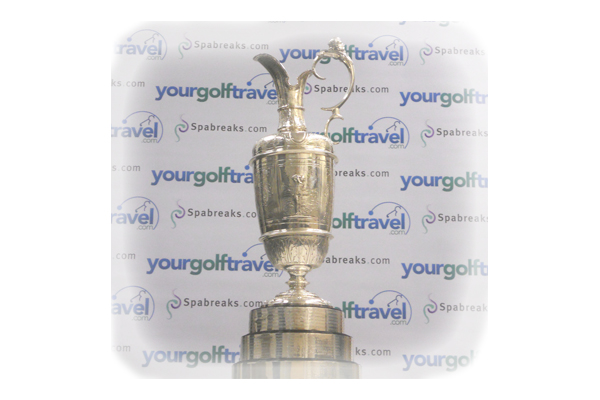 The Open Championship – History of the Claret Jug

The Open Championship, or the British Open as it’s known overseas, is the oldest of the four major championships in golf and the only one held outside of the USA. Needless to say the event is a special one for golfers, both professional and amateur, and a special event requires a special trophy.

The Claret Jug, or to use its proper name, The Golf Champion Trophy, is presented to the winner of the Open each year and while the famous trophy has been around for generations, it is not the original prize awarded to the Champion Golfer of the Year.

The Open Championship began in 1860 in Ayrshire at Prestwick Golf Club and back then the winner was presented with the Challenge Belt which was made of rich morocco leather and embellished with a silver buckle adorned with a few emblems.

The Challenge Belt, originally purchased by members of Prestwick, came about thanks to the Earl of Eglinton, a man with a keen interest in medieval pageantry, who was an important figure in the promotion of sport among the masses and an integral part of the formation of the Open Championship.

The first rule written in relation to the Open stated that ownership of the Challenge Belt would pass to any man who won the tournament three times in succession and so after just ten years there was a hunt on for a new trophy thanks to the exploits of a certain Young Tom Morris who had indeed completed the first hat trick of the Open era.

In 1871 the direction of the Open Championship would change. Other clubs including the likes of St Andrews and Musselburgh were to co fund the purchase of a new prize and as such members of Prestwick felt that the tournament could no longer be held solely at their club. The motion was passed but final arrangements were delayed to the point where the Open would not be played in 1871.

Muirfield will host this year’s Open Championship. Who will walk off with a replica Claret Jug this time around?

Agreement was finally reached on September 11, 1872 between the three clubs that were to host The Open — Prestwick, the Honourable Company of Edinburgh Golfers and The Royal and Ancient Golf Club. It was also agreed that each of the three clubs would contribute £10 towards the cost of a new trophy, which, rather than another belt, was to be a silver claret jug, the proper name of which was to be The Golf Champion Trophy.

Made by Mackay Cunningham & Company of Edinburgh, and hallmarked 1873, The Golf Champion Trophy was first awarded to Tom Kidd in 1873 and yet the first name to be engraved on it was that of Young Tom Morris who had won the Open in 1872 before the trophy was purchased.

The stature of the Open Championship grew and grew and following Bobby Jones’ win in 1927, a decision was made that the Royal and Ancient Golf Club would retain the original Claret Jug from then on, with a replica being awarded to the victor. Only 28 golfers ever got their hands on original trophy while it was in circulation from 1872 onwards.

A lot of this may be news to even the most ardent golf fan but many will be aware that Open Champions also get presented with a winner’s medal. The first of these appeared in 1872, the year before the Claret Jug arrived on the scene. Unlike the Claret Jug, Gold Medals, which were actually made from Silver gilt, remain with each and every champion who wins one. Interestingly enough golfers who won the Open pre 1930 had the cost of the medal deducted from their winnings!

Of course the Open Championship is exactly that: an open championship! This means amateurs can enter (as long as they get through Open Championship qualifying that is) and so what of the prize for the non professional golfer? It had been suggested as early as 1922 that some recognition should be given to the leading amateur at The Open however it was not until 1949 that the Silver Medal was presented. In addition to this, all amateurs since 1972, other than the leading amateur, who have played on the final day of The Open Championship, have received a bronze medal for their efforts.

If you want to be there for the presentation of the Claret Jug to the Champion Golfer of the Year then be sure to check out our Open Championship Ticket Packages. Attending the Open and seeing the best players in the world do their stuff on a fearsome links like Muirfield is a real bucket list experience!