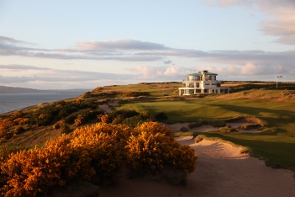 As well all know, Scotland, and St Andrews in particular, is the Home of Golf. This is where the game was born and is, unsurprisingly, home to a whole host of golf courses – over 550 by some counts – some of which are among the best in the world. It goes without saying then that the national championship from the Home of Golf, the Scottish Open, has been played on some pretty awesome golf courses and with the 2012 edition of the tournament just days away we thought we would take a look at the top 5 Scottish Open host courses and a couple that could and should be set to host it in years to come.

After 15 years in the tranquil surrounds of the stunning Loch Lomond, the Scottish Open headed north to Inverness to be played at Castle Stuart, one of the most exciting golfing projects to be completed in Scotland since the arrival of the mighty Kingsbarns in 2000.

Castle Stuart boasts a number of holes that run right along the water’s edge.

Designed by Gil Hanse, the man chosen to design the Olympic Golf Course for the 2016 games, Castle Stuart sits, precariously at times, on the banks of the Moray Firth and provides some unforgettable panoramic views. Castle Stuart is the epitome of contemporary links course architecture, with wide fairways, huge undulations and extraordinary greens, all bordered by thin fescue, broom, gorse and heather. A must play for anyone embarking on a Scottish Golf Tour.

Carnoustie hosted the Scottish Open for two years before it headed to Loch Lomond and just as it does every time the Open Championship comes to town; it provided a world class test of golf in its most traditional form.

The famous Barry Burn at Carnoustie has claimed its fair share of victims over the years, most famously Jean Van de Velde.

The Carnoustie Championship is one of the most feared tournament courses in the world. Mind boggling undulations, gorse, choppy rough and countless pot bunkers make the battle against Old Man Par a tough one and with hazards like the Barry Burn lying in wait, golfers will do very well to play to their handicaps. Still, if the challenge is embraced Carnoustie remains one of the most exciting golf courses in the world to play.  The closing stretch of holes, from the 15h onwards, is considered by many to be among the finest in the world. During this little run of holes golfers will have to cross the dreaded Barry Burn on numerous occasions, no less than 5 time over the last two holes in fact!

Gleneagles has long been a household name in Scottish Golf thanks to its three majestic golf courses and its 5* hotel which ranks among the very best in the world. Before the Scottish Open made its way to the rugged links of Carnoustie, it was played in the more scenic surrounds of the Scottish Highlands, on the amazing Gleneagles King’s Course.

The dramatic elevation changes on the King’s Course make club selection and shots around the greens a tricky proposition.

The King’s Course was designed by all time great, James Braid, and is perhaps the best moorland golf course on the planet. The holes blend perfectly into the landscape. Springy fairways wind their way through punishing rough, strewn with heather and gorse and countless mature pines, silver birch and rowan provide natural amphitheatres on a number of the holes. Dramatic elevation changes and natural undulations are key features on a number of holes and you will most likely find yourself sharing the course with the local wildlife. Lee Trevino, standing on the 1st tee of the King’s course, remarked: “If heaven is as good as this, I sure hope they have some tee times left”.

There are a handful of courses across the globe that need no introduction and heading the list is the world famous St Andrews Old Course, host of the Scottish Open way back in 1973. For avid golfers worldwide, the chance to experience The Old Course is the ultimate, offering the chance to follow in the most famous of footsteps over the historic turf that is widely recognised as the ‘home of golf’. Tackling famous landmarks like the Swilcan Burn, Hell Bunker, The Road Hole and the Valley of Sin en route around the most iconic golf course in the world is thrilling and is something that all golfers should experience before they hang up their clubs for good.

The Old Course at St Andrews is the most famous and sought after golf course in the world.

Routed roughly in an anti-clockwise loop, The Old Course leaves golfers completely at the mercy of the elements, with the persistent see breeze constantly changing the character of the challenge. The long homeward stretch builds towards moments of drama, including the long 14th, the nervy 16th, with out of bounds lining the right side, before the unrivalled challenge of The Road Hole, played in the shadow of the stunning Old Course Hotel. Book a St Andrews golf tour to have your chance to experience the world’s most famous golf course.

Take the high road. Take the low road. It doesn’t really matter which route you take, a visit to the bonnie banks of Loch Lomond is a truly unforgettable experience. A hop, skip and a jump from Glasgow, under the watchful guard of Ben Lomond, lays the largest expanse of fresh water in Great Britain and midway along the western banks of the loch lies the most exclusive private members’ golf club in the land.

Loch Lomond is an exclusive private members’ club so securing a tee time relies on being chums with a member. If you ever get offered a game don’t pass up the chance!

Designed by Jay Morrish and Tom Weiskopf, Loch Lomond opened for play in 1993 and became the long term host course of the Scottish Open three years later. Weiskopf sees Loch Lomond as his lasting memorial to golf and who could blame him? Set in a breathtakingly beautiful area, the golf course itself had a tough task of living up to its surroundings but the spectacular design has seen it garner considerable praise from those lucky enough to have had a round. According to Colin Montgomerie, “Wherever Loch Lomond is ranked, it ought to be higher.”

Each hole, with the exception of the 2nd and 4th linked green, is isolated from next and with no hidden hazards on the course, the player is presented with an exciting a strategic challenge on each and every tee.  Measuring 7,100 yards from the back tees, this is a tough course for the average club golfer but if you are lucky enough to get a game, don’t expect to threaten Retief Goosen’s course record of 62, but do expect to use every club in the bag…a truly great test of golf from start to finish.

The Scottish Open then, has been contested on some truly great golf courses in the past. Castle Stuart is set to host the tournament for the foreseeable future but with so many great golf courses throughout Scotland it will surely one day move onto pastures new. Here are a few courses that we think should get the nod when that time comes.

Since opening in 2000, Kingsbarns has garnered a considerable reputation as one of the best links courses in the world and certainly as one of the very best golf courses built in the last couple of decades.  Designed by American Kyle Philips, Kingsbarns was created by moving and shaping vast amounts of earth and yet it appears entirely natural and in sync with the natural lay of the land. Breathtaking hole after breathtaking hole makes choosing a signature hole a tricky task but if I were pressed I would go for either the par 5 12th or the par 3 15th; two holes that really get the blood pumping from start to finish. Walk off each of these greens with a par on the scorecard and you have done well!

The par 5 12th at Kingsbarns…needless to say hugging the left of the hole in an attempt to reach the green in two is a risky tactic!

Views of the sea from almost every hole are complimented by a strategic layout that will require good decision making and the mastery of every club in the bag. Kingsbarns is traditional golf at its very best and we think it’s a course you could never tire of playing…a magnificent Links.

“The Donald’s” latest golf course has turned plenty of heads for a number of reasons since the land was acquired by the American property tycoon a few years back. While there have been plenty of contentious issues surrounding what Trump himself has described as “the greatest golf course in the world”, one thing remains certain; this is the most eagerly awaited golf course since Kingsbarns was being planned at the start of the millennium.

Now completed and just weeks away from opening its doors to the public, Trump International Golf Links looks as if it has lived up to its considerable hype.

Trump International Golf Links is the most talked about new golf courses in years.

Designed by Dr. Martin Hawtree, on the recommendation of the R&A, this links course looks to have all the hallmarks of a great links course. Fast running, undulating fairways, pot bunkers and towering dunes covered with punishing marram grass are all present and from various points on the course, golfers will be treated to spectacular views of the sea.

The championship course is very much in the shape of traditional Scottish links and the par 72 that measures a little over 7,400 yards is surely destined to host major tournaments in the not too distant future. Trump built the course with the intention of it one day hosting the Open Championship but the R&A notoriously picky when it comes to the Open rota, it is safe to say that won’t be happening any time soon. Perhaps a visit from the Scottish Open will give us some idea of the courses potential to host the game’s oldest major championship.

The newest addition to the Loch Lomond Golf Club is the majestic Dundonald Links, whose design was penned by Kyle Phillips, creator of the aforementioned Kingsbarns. Recognised by many as one of the finest newly completed links courses in the world, Dundonald is situated on the famous golfing coastline around the town of Troon.

The Dundonald Links was deisnged by Kyle Philips, one of the most sought after golf course designers in the world.

Like Loch Lomond, Dundonald is a total experience, where you will be treated like a king from first to last. The new links has already matured well, and is attracting plaudits from far and wide. With a total yardage of over 7,300 yards, Dundonald is certainly capable of hosting professional tournaments and with a few more years of maturing under its belt, I’m sure the Scottish Open will pay a visit sooner rather than later.