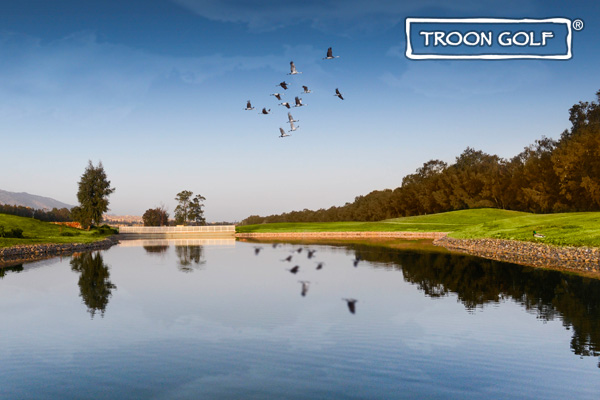 Year-round sunshine, fascinating culture, quality golf courses and short flights from the UK; there are plenty of reasons why Morocco is one of the most exciting and upcoming golf destinations in the world.

With so much more than just golf on offer, it’s no surprise that people are considering Morocco as an easy and more affordable alternative to other golf destinations like Spain and Portugal. Steeped in history and culture and boasting a great range of golf courses in beautiful surroundings, it’s easy to see the attraction.

While Morocco is already home to several fantastic, more-established courses, one of its newest creations looks set to steal the limelight as the jewel in the crown of Moroccan golf.

Opened at the end of 2012, the Oued Fes Golf Resort represents a landmark development for golf in the area. The 18-hole, championship-style golf course has been designed by the highly respected architect Jonathan Gaunt, who has crafted some of the finest projects across Europe, the Middle East and Africa. Any questions over the resort’s pedigree should be immediately answered by its location adjacent to the King’s Royal Palace.

Stretching over 6,938 yards, the course design features a unique blend of woodland, wetland and grassland; but its true peculiarity lies in its situation in an area susceptible to flooding.

Gaunt explains: “The course is set on flat land – a flood plain – next to the King Mohammed VI’s Palace. Through the centre of the site flows a river known as Oued Fes (where the course derives its name), which doesn’t dry out, even in summer. However, every winter this river floods the valley and threatens to flood the King’s Palace, too.”

In order to keep Oued Fes in play throughout the year – as well as ensure sufficient drainage for the safety of the King’s Palace – Gaunt raised the level of the fairways, greens and tees, 300m driving range and practice greens to an elevation 1.5 metres above the 100 year flood level. Any areas not built up are crossed by timber boardwalks, buggy tracks and bridges.

The grassland areas of the course encompass bold, flowing and undulating features with some water channels that flood when levels rise in the winter and become wetlands during the drier seasons. The result is something golfers in Morocco or travelling there on holiday might not expect – a lush green oasis in an area more noted for arid heat.

These stunning natural features will eventually enhance the views from the new golf villas, apartments and hotels that will eventually adorn the property. The resort will also offer extensive shopping and leisure facilities.

For the time being, visitors are invited to stay at the nearby Barcelo Fes Medina – a four-star hotel with an outstanding restaurant and a fine array of leisure facilities which make for a fantastic base for exploring the region’s golfing gems.

Oued Fes is located in the tourism hub of Fes, Morocco’s second-largest city. Visitors to the country’s former capital will be enthralled by the architecture and cultural attractions, not to mention the ancient walled city of Fes el Bali, the largest living medieval city in the world. This UNESCO World Heritage Site features an incredible maze of 9400 twisting alleys and blind turns, all crammed with shops, restaurants, workshops, mosques, dye pits and tanneries.

Located just seven miles from the city’s national airport and a three-hour flight from London, Oued Fes is ideally situated to attract visiting golfers from the UK seeking a multi-faceted holiday experience.