It seemed like a good idea at the time – to play five rounds in five days in five countries. We all thought it was a bit ambitious but after a few pints in the clubhouse, we decided it was a tee-rific idea.

Our fourball takes a trip every year, usually to northern France, but we wanted to try something different, a little spin on the golfing holiday. So in the time it takes time it takes Bryson to line up a 3 foot putt we had worked out the logistics.

That was the order of play.

Having decided to take the Hull-to-Zeebrugge ferry route to reduce some of the driving – Dover-Calais was second choice and less expensive – North Berwick was the starting point. 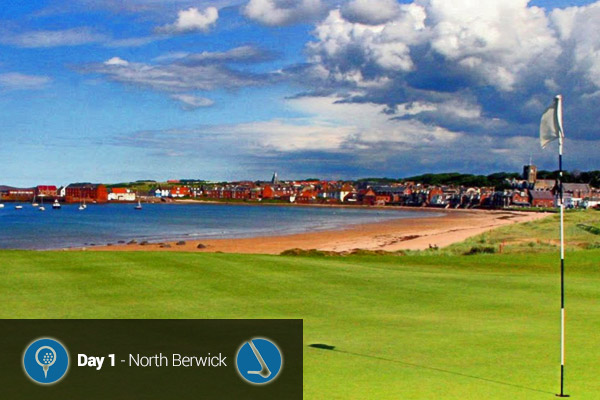 We stayed the night at one of the town’s newest B&Bs, simply called 6a, and enjoyed a hearty Big Berwick breakfast that we needed to keep going all day.

The East Lothian seaside town is sandwiched between two fine and contrasting golf courses – the traditional West Links and The Glen, a moorland track set on cliffs that offer spectacular views of the Bass Rock and Firth of Forth.

We plumped for the easier – and cheaper – test in The Glen. This par-70 clifftop track is perhaps not as well known as its sister West Course but is a belter all the same. Everyone agreed the signature hole – the amazing little 13th – was aptly named. It is a beauty.

On the face of it the 148-yard par three seems like a breeze but it is more of a hurricane. Guarded by the beach and rocks you miss the putting surface at your peril. It is one of the truly great par 3s in Scotland. Another favourite hole at the Glen is the glorious 18th with the elevated tee offering fantastic views of North Berwick itself and across the Firth of Forth to Fife. A truly majestic finishing hole.

So having enjoyed a superb 18 holes in the morning we put the docks at Hull into the sat-nav and with the 4×4 packed to the gunnels with luggage, four sets of clubs and a “small” carry-out – not for the driver of course – we headed south.

The ferry to Zeebrugge set sail at tea-time and we had drinks, dinner and hit the casino before crashing out in one of the roomy cabins. We’d given the band and cinema a miss. 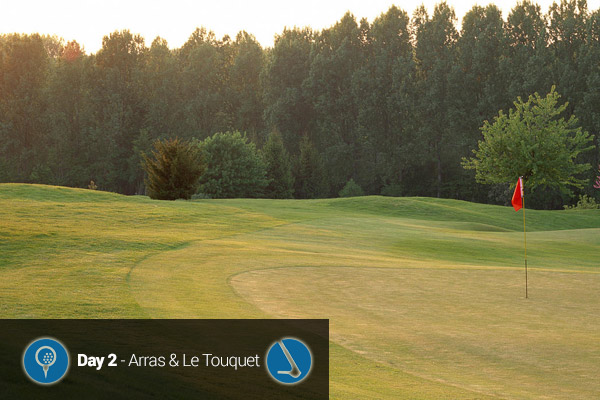 This really is a great way to reach the Continent and we were wakened for breakfast at 8am as we approached the harbour.

At this point, we did wonder if our idea was about to unravel. Somewhat bravely we had decided to play two courses in France on day one. So, hearts in mouths, we set off on the two-hour drive to Le Touquet, south of Calais, and we made our 11am tee time with 15 minutes to spare.

Le Touquet is, without doubt, one of northern France’s prime golf resorts with two fine 18-hole courses – La Foret and La Mer – a nine-holer, practice facilities and a new clubhouse under construction. When finished, it will look a lot like the tented village at The Open.

Had there been more time we’d have tackled the nine-hole La Manoir course as a loosener. We have played here before and the limbering up on the short course is a treat. It is a par-35 course at just over 3,000 yards and it works wonders on your game before for the longer trek later in the day. But not this time so we set off to tackle La Foret and it was in beautiful condition.

The course doesn’t seem all that long at just 6,300 yards but it is a good test for golfers at all levels. Designed by Horace Hutchison it gives you pause for thought at most holes and the greens always need real care. There are other superb courses nearby, including Hardelot and Belle Dune, but the facilities at Le Touquet are top-notch with a new clubhouse under construction. The whole area is a golfers’ paradise.

Le Touquet has been the playground of rich Brits and Parisians for almost a century. If we hadn’t booked a second game in France we’d have popped into the town centre of Le Touquet for a beer. This is where the well-heeled go for short breaks and while food and drinks are more expensive than average it is the perfect place to relax for a couple of hours and people watch.

But tempis fugit so it was off to Arras for round two. The town is an hour’s drive north-east and a couple of showers couldn’t dampen our enthusiasm for a course that has plenty of water and some spectacular holes.

Again, it has a nine-hole course on site to get those muscles in good order. It is called Les Aubepines and comes in a meagre 1,700 yards. It was busy when we arrived and the pro told us many locals and visitors like to use it as a warm-up before tackling the Championship course, La Vallee.

There is water on many holes, especially on the front nine with a couple of decent hills, including a daunting par five, on which two of us registered pars. This is rightly rated as one of the top courses in northern France, nestling in the River Scarpe valley. And, like so many in the area it has luxurious houses overlooking play. Arras really is a cracking course with a lovely hotel and luxurious clubhouse on site. Once played, never forgotten.

Play Arras on a Golf Tour

It had been a long day and we were relieved when we arrived at base camp in the brewery town of St Omer. After a quick shower and change in our gite we found the nearest bar which was a long putt away and after walking 36 holes and driving about 300 miles that was as far as we were going … and just as well.

What we found didn’t look anything special from the outside but Le Phare Cafe was a watering hole par excellence. Inside there were more than 100 bottled beers on display as well as half-a-dozen St Omer brews on tap.

With a long drive to Breda, just over the Belgian border in Holland, we reluctantly called it a night about 1am – bars stay open until the customers go home – and vowed to be back.

Day three started with a two-hour drive to play Golfpark de Turfvaert, just one of 49 courses in the North Brabant region. Although inland, this really has a British links feel to play – the wind is always a factor and the rough can be a real killer. And, like Arras, water is a feature on several holes. Great views, sloping fairways, severe rough and deep bunkers – if it wasn’t for the dikes I’d have thought we were back on the east coast of Scotland.

The par-70 Turfvaert is also further away from the coast though so it’s regarded as an Inland Links Course. There are four par-fives in the first 10 holes so big hitters have a chance to score early and all in all it was a good and enjoyable test.

For those with time to spare, there is a lovely brasserie and terrace for a spot of apres golf. But not for we four so we returned to St Omer about 8.30pm and were sitting at a table on the pavement of Rue de Dunkerque half an hour later sampling La Phare goodies. Honestly, 100 yards was about as far as we could walk – or about as far as Phil could drive. We all tried the local Belzebuth Rouge and were instantly fans – a bit like the fruity and refreshing Leffe Ruby but not as sweet.

As Alan said “this sets the standard for all small bars”. He was right – a better bar you couldn’t find. All it lacked was a pool table but that was removed to make way for a stage where bands played at the weekend. And, when there is no live music, there is always a background sound, ranging from rock to country. We went to bed early that night – midnight. Not bad for four middle to old stagers (handicappers). 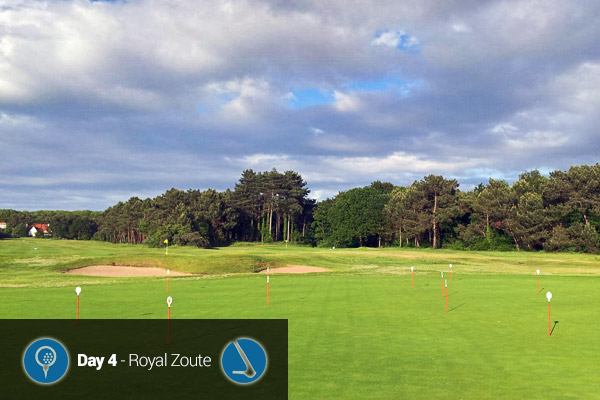 Day four was going to be another challenge – a 100-mile drive into Belgium to play Royal Zoute, a links course five miles north of the port of Zeebrugge. Near the upmarket seaside town of Knocke, Royal Zoute boasts two cracking courses in pristine condition and if you’re in the area you must pay them a visit. We played the Championship course and every hole was a belter with some memorable par threes.

Three-time Open champion Nick Faldo described it as a “hidden gem” and he is right. You expect pure links being so close to the sea but trees planted after World War Two lend the course a slightly softer, almost parkland, feel. Although the par-72 Royal Zoute is officially billed as a links course you never catch sight of the English Channel and it was quite lush when we played at the end of May. In summer, we were, told the fairways are burnt and fast running.

Greens were in superb condition and the smaller Executive course, with a par of just 64, also looked the part so if you had time it would make a great two-round day out. And both courses converge at a cracking little halfway house where you can top up before the second nine. This is a great idea and I am sure most golfers would welcome the chance to take a break mid-round at their courses.

After a most enjoyable round, we left Zoute and headed back to Zeebrugge. There was virtually no traffic so it took just 15 minutes to reach the ferry terminal and we were on the way back home. We don’t know how often it happens but at the bar where we were playing cards Corona beer was being sold at just £1 a bottle. That was fun.

The overnight voyage to Hull was as smooth as the sailing down and we got off the ferry refreshed and ready to go again.

Final stop was Penrith, minutes off the M6, and that turned out to be the perfect choice.

It sits high above the Eden Valley with spectacular views across Lakeland hills. It is more moorland than hill and has an interesting layout – it turns 180 degrees every three holes so you are never safe from the wind for too long. At par 69 and just over 6100 yards Penrith is no one’s idea of a monster so the Big Dog is not always a necessity but you have to be accurate from the tee or you’ll be in the trees.

Again it was a track in great condition with some stunning par threes and a fitting way to finish our trip. The Glen, La Foret, Arras, Turfvaert, Zoute and Penrith – we had actually played six courses in five countries in five days. Not bad, eh.

It had all started in North Berwick and ended with a celebratory drink in Penrith. That’s a distance of 137 miles but we had put 1559 on the clock.
If there had been a long-drive contest, that was the winner.

Fancy testing yourself with a similar trip? Check out a host of fantastic golf tours with Your Golf Travel, the world’s largest golf travel company.