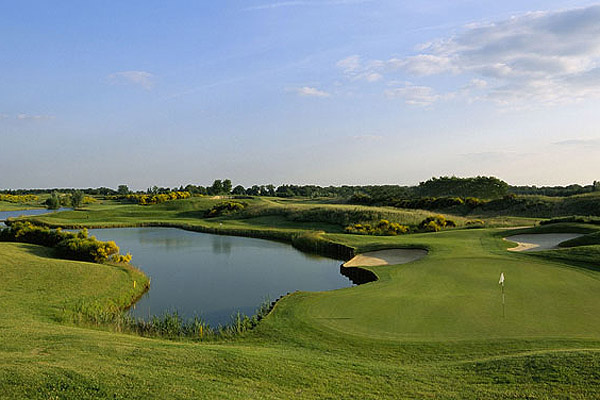 We all know The 2018 Ryder Cup will be staged at the amazing Le Golf National in Paris.

And that Team USA will arrive on European soil as holders of the Ryder Cup.

But up until now the Ryder Cup Captains for the next instalment of golf’s greatest show have been unbeknown to golf fans.

Thomas Bjorn however, has now been named as Team Europe’s next Ryder Cup Captain.

And there are few, if any, who are more qualified for the job…

Bjorn was thought to be up against 1999 Open Champion Paul Lawrie and there’s plenty to suggest the man known as “Chippy” will get the gig at some point in the future, but following an announcement this morning, it’s Bjorn for 2018.

The 45-year old Dane has long been Chairman of the European Tour Tournament Committee, a position that could be tied to a long-standing and recurring neck injury that has limited his playing schedule over recent years.

As a player, Bjorn has featured on three Ryder Cup sides, in 1997 at Valderrama, at The Belfry in 2002 and, most recently, at Glengealges in 2014. He’s been on the winning team each and every time.

His Ryder Cup involvement doesn’t end there, having also represented Europe as an Assistant Captain on no less than four occasions, most recently on the losing side in Hazeltine.

Amazingly, Bjorn will become just the 4th man from Continental Europe to take charge of Team Europe since they joined forces with golfers from Great Britain & Ireland some 37 years ago in order to redress the balance between them and the might of the USA.

Ryder Cup legend Seve Ballesteros was naturally the 1st to do so in 1997; and he’s since been followed by Bernhard Langer in 2006 and Jose Maria Olazabal in 2012.

Seve was the 1st ever Ryder Cup Captain from Continental Europe and when he lead his side out at Valderrama, it was also the 1st time the match had been held on the continent.

Coincidentally, that year marked Thomas Bjorn’s 1st appearance in the Ryder Cup and the 1st of any Danish player.

With Seve seemingly everywhere and, at certain points, even advising on how players should be hitting certain shots, Europe prevailed 14.5 – 13.5.

“This is my best win ever. I have won five Majors, six Order of Merits, many great tournaments around the world, but I have felt nothing like this.

“I am the happiest man in the world. This will go down in history because I am the first non-British Captain to win The Ryder Cup as a Captain and a player. The players in my Team played with heart and that is why we won.”

By the time 2006 rolled around, Europe were becoming accustomed to winning the Ryder Cup after having seen a power shift away from America who had traditionally dominated the competition.

Langer still left absolutely nothing to chance, following the same studious and meticulous principles that had defined his playing career.

Hal Sutton had his cowboy hat and Bernhard trampled all over it with his shoes draped in the colours and stars of the European flag, leading his team to a historic 18.5 – 9.5 victory; the largest by any European Team and the largest by either side since 1981.

There’s very little left to say about the 2012 Ryder Cup that hasn’t already been said.

By the time the dust had settled on Medinah, the 2012 Ryder Cup was already being labelled as the greatest event ever seen in golf and you can understand the hyperbole.

Team USA had come back from the same deficit in 1999, but that was on home soil. Olazabal’s men did it in a hostile, sometimes overly partisan arena. And the timeline of events at Medinah was infinitely more dramatic.

From Poulter’s closing 5 birdies on Saturday evening and Rory almost being a no-show, save for a much-welcomed (at least from a European viewpoint) ride in a police cruiser, to Justin Rose’s monster putt and Martin Kaymer’s ice-cool winning putt, the closing act at The 2012 Ryder Cup was featured epic sporting moments and intrigue galore.

There was a lot of talk that week of Seve being the team’s inspiration but it was his great friend, Captain Olazabal, who channelled Seve’s famous fighting spirit into his team.

“He has made us cry in the team room this week,” said Rory McIlroy when speaking of the emotion running through Team Europe. “Some of us have broken down into tears with some of his speeches. And to play so well out here today knowing that Seve’s looking down on us, it’s just been one of the most incredible days that I’ve ever had on the golf course.”

So Thomas Bjorn has some big shoes to fill then when you look back on past Captains’ from Continental Europe.

But a five-man selection panel, comprised of Darren Clarke, Paul McGinley and José María Olázabal, Team Europe’s three most recent Captains, as well as the European Tour’s Chief Executive Keith Pelley and Henrik Stenson, the men behind the decision to hand the Dane the reigns, obviously think he can handle the heat.

And it seems Thomas himself couldn’t be more pleased…

“It’s a huge honour for me to be named European captain for the 2018 Ryder Cup in Paris,” said Bjorn. “This is one of the greatest days in my career.

“I studied a lot of Captains as a player and as a Vice-Captain and always wondered what that feeling would be like to be the one leading out a team of 12 great players. Now it’s my turn to do just that and it is an exciting moment for me.

“I have lived and breathed the European Tour for so long, and now I will do the same with the Ryder Cup for the next two years. I’m very much looking forward to taking on this task.”

Whatever happens at Le Golf National two years from now we at YGT wish Thomas all the best and while the outcome is far from predictable, one thing is certain: The Ryder Cup will no doubt be another breathtaking spectacle.