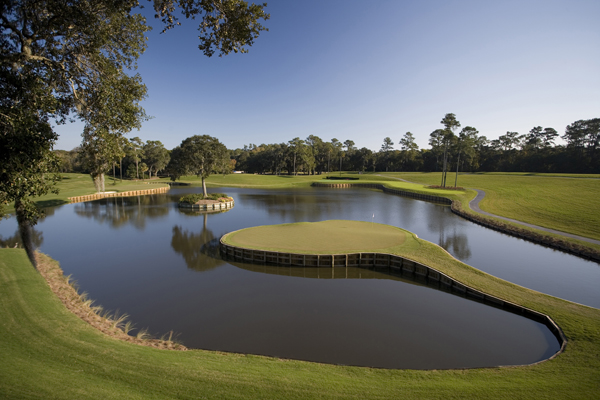 Tiger Takes The Title as Sergio Sinks at Sawgrass

So golf’s fifth major has been and gone and as per usual the Stadium Course at Sawgrass delivered fireworks right up to the death. Tiger notched up yet another PGA Tour victory and yet again he had the last laugh over Sergio Garcia.

Garcia and Woods were playing together in the third round and it didn’t take long for the animosity between the two to spill over the edge.

Sergio blocked his second shot into the par 5 second way right and immediately glared in Woods’ direction. According to Sergio, Tiger had caused the crowd to shriek and holler at the top of his backswing by pulling out a fairway wood, signalling his intention to go for the green in two.

“I wouldn’t say that he didn’t see that I was ready, but you do have a feel when the other guy is going to hit and right as I was in the top of the backswing, I think he must have pulled like a five-wood or a three-wood and obviously everybody started screaming.”

Tiger’s version of the story is that the marshals had given him the signal that Sergio had played and he was good to go.

“The marshals, they told me he already hit, so I pulled a club and was getting ready to play my shot, and then I hear his comments afterwards, and not real surprising that he’s complaining about something,” Woods said.

TV replays don’t really give a clear cut picture of exactly what happened but they do suggest that Sergio’s assertion that the crowd noise came “right at the top” of his backswing is a little wide of the mark. Garcia seemed to have plenty of time to step away from the ball, collect his thoughts and then hit the shot…something that we have seen Tiger do countless times.

Whatever the intricacies of the latest Tiger vs. Sergio controversy; the final round was now a tense affair. Would the Spaniard be able to topple the Tiger? The fact that Woods had shot the lower score 12 out of the 19 times they had played together on the PGA Tour suggested it was unlikely.

When the players came towards the end of the back nine however, a playoff seemed likely. Woods and Garcia had been joined at the top of the leaderboard by the aging Jeff Maggert and an unknown rookie, David Lingmerth but, as is the norm, Tiger’s challengers fell by the wayside and he took the spoils.

To be fair to Messrs Garcia, Maggert and Lingmerth, it wasn’t really a fair fight.

Woods is potentially the greatest front-runner golf has ever seen. When having at least a share of the 54 hole lead throughout his career, he has waltzed off into the setting sun, trophy in hand a staggering 51 times out of 55. Thos e numbers can now be adjusted to 52 out of 56.

It also didn’t bode well for the rest of the leaders when Woods asserted that he was “driving it well, hitting it well with my irons, my distance control is good, short game is really solid, and I’m making my share of putts.”

It was classic Woods at Sawgrass on Sunday. He played defensive golf and never fell out of the lead, grinding out par after par with the odd blip, including a big blip on the 14th, and the odd birdie as well, while his opponents all inevitably gave up the ghost when it came to the business end of the final round.

First to go was Maggert. The 49-year old veteran dropped his tee shot in the watery abyss surrounding the 17th hole and that was that. The inexperienced Lingmerth then bogeyed the 14th hole after failing to get up and down for a par.

Garcia’s implosion was the most memorable. Arriving on the famous 17th after a birdie on the par 5 16th, the Spaniard also found the water from the tee. In a Tin Cup moment he then elected to play his third form the tee rather than the drop zone. Cue another ball in the water and a quadruple bogey 7. Another ball in the drink on the final hole simply added insult to injury.

The 17th is one of the most feared holes on the PGA Tour and it marked the end of Sergio’s challenge.

“That hole has been good to me for the most part. Today it wasn’t. That’s the way it is. That’s the kind of hole it is. You’ve got to love it for what it is,” said Garcia.

Sawgrass isn’t usually so kind to Tiger, but this week it was. “We were on a mission,” Woods’ caddie Joe LaCava said. “He is too good of a player not to play well here.”

He did play well and it seems he is too good. “It was fast and difficult,” said Woods. “And I hit it so good today, it was fun. I hit it high, low, left to right, right to left, whatever I wanted.”

Victory at Sawgrass means Woods has won three of his last five events; four of his last seven and seven events in the last 12 months. Those figures have taken him to 78 PGA Tour wins which is four shy of Sam Snead’s all time record of 82. That record will almost certainly go; maybe even in 2013 should Woods carry his form into the rest of the year. Apart from that all that’s left is Nicklaus’ major record.

With the US Open just a few weeks away and the fact that it seems Woods again has the world of golf wrapped around his little finger, we expect to see major number 15 for Tiger sooner rather than later.