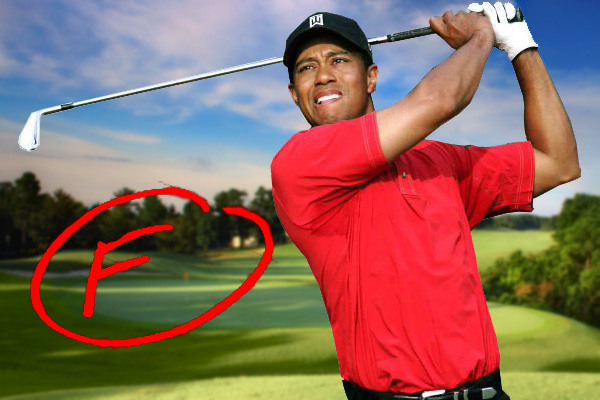 Tiger Woods get an F from Brandel Chamblee

Many of the world’s best athletes, whether they be individuals or members of a successful team, seem to polarise the opinions of sports fans and none more so than Tiger Woods.

On one side you have his faithful followers who ignore the off course “transgressions” and focus solely on Tiger the golfer, his records and the records, one in particular, that he still aims to break.

On the other you have his detractors who think no amount of talent, magical shots and on course success can excuse the club throwing and cursing that, unfortunately I have to say, is part and parcel of Woods’ game.

One person who seems to fit obviously into the latter is Brandel Chamblee, former PGA Tour player turned Golf Channel Commentator and golf writer, who has recently lit the touch paper by, in a rather round-about way, accusing Mr Woods of cheating.

Since the story was published Chamblee has taken to his Twitter account to defend himself and say he wasn’t accusing Woods of cheating but while he didn’t directly use the “C” Word – his exact words were “He was a little cavalier with the rules.” – the implication was clear.

As Tiger’s agent, Mark Steinberg has pointed out, “There’s nothing you can call a golfer worse than a cheater,” and while Woods’ well documented rules infractions during his 2013 season could well have been avoided and / or handled better by most including Tiger, suggesting the world’s best player’s achievements in 2013 have been sullied by various cases of cheating is a little strong or, in Steinberg’s words “out of bounds.”

Chamblee’s comments on Tiger’s rules infractions in 2013 came in a recent end of season report card where he graded various players on their achievements throughout the season. The fact that Woods won 5 tournaments including two World Golf Championships, PGA Tour Player of the Year (voted for by his peers) and yet another Vardon Trophy were mentioned but a score of “100” was scored through and below his grade was awarded…a lowly “F”.

Chamblee also makes sure not to forget to list the four rules infractions that some see as just that and others see as blatant acts of cheating at the foot of the page.

An unwitting illegal drop in Abu Dhabi after an on course consultation with playing partner Martin Kaymer – quite a common occurrence in the life of a tour player – resulted in a two shot penalty and the resulting missed cut. Ignorant…unfortunate…but hardly an act of deceit.

That was followed by the most notorious of the infractions of the year. We all know the story. Having hit a near perfect approach on the 15th hole during his second round at The Masters, Woods suffered the bad luck of his ball hitting the pin and rebounding into the water.

Queue an incorrect drop which Woods unwittingly alluded to in a post round interview, a two shot penalty and the subsequent discussions over should he or shouldn’t he have withdrawn from the tournament. Sir Nick Faldo suggested Tiger should have withdrawn by the golfing gods that are Jack Nicklaus and Gary Player have both stated that, whatever the decision of the rules committee in question, you as a player MUST stick by it.

At The Players Championship, which he won, Woods took a drop after hooking his tee shot into the water on the 14th hole which the anti-Tiger brigade believed was an incorrect one. His playing partner at the time, Casey Wittenberg, had no problem with the drop Woods took after finding the water on the 14th hole. “I told him exactly where I thought it crossed, and we all agreed.” Should the player in question have been anyone other than Tiger Woods, you have to question if anyone would have even battered an eyelid and, in clearly stating Woods to the correct drop, is Wittenberg also a cheat in the eyes of the golfing conspiracy theorists?

Finally came “oscil-gate” where Tiger tried to move a twig behind his ball at the BMW Championship, moving his ball in the process. Woods argued the ball simply oscillated and didn’t move from its original position but TV replays, although hardly conclusive, might have suggested otherwise.

Tiger protested on this occasion but was still handed a two shot penalty. In all other cases he simply took the punishment that was handed out to him and soldiered on.

Going back to one of my earlier points, you have to wonder if any of these incidents would have even made it into the news had the offending player not been Tiger and, to make any qualified judgement, surely we would need to know how many times the average pro golfer (nobody has to deal with the same level of scrutiny as Woods on a round to round basis) is called into the rules officials office per year. Wood’s four separate “infractions” may be high, low, or spot on the average…who knows?

One thing we do know is that, despite what your feelings towards Tiger Woods might or might not be, throwing around the “C” word in the game of golf is a serious statement.

Another thing that Chamblee overlooked is that, if each of Tiger’s 2013 rules infractions are cases of cheating, then surely the players who he was playing with at each event, the players who agreed and allowed him to take the actions he was taking, are cheats as well…accessories to cheating at the very least?

Martin Kaymer was with Tiger in Abu Dhabi and agreed Woods should get a free drop. Scott Piercy was the man alongside the world number one at Augusta and Casey Wittenberg told Woods exactly where to drop at TPC Sawgrass. None of them had any problems with Woods’ actions.

While knowing the finer points of the rules of golf is something professional golfers should aspire to, not knowing them and making mistakes every now and again is in fact not against the rules.

Does Chamblee not recall being disqualified from 2003 Chrysler Open for an incorrect drop? Does the fact that he took an incorrect drop automatically make him a cheat? Or is it simply a case of the player not knowing the exact science of the rules of golf – which, let’s be honest, are not the easiest to decipher – being a case of ignorance rather than a deliberate act of trying to gain the upper hand over the field.

One thing I’m sure we’d all like to see is – rather than players being labelled cheats – a rules official being sent out with each group in a professional tournament so that any indecision or incidents where the ruling is not quite clear can be sorted within a matter of seconds.