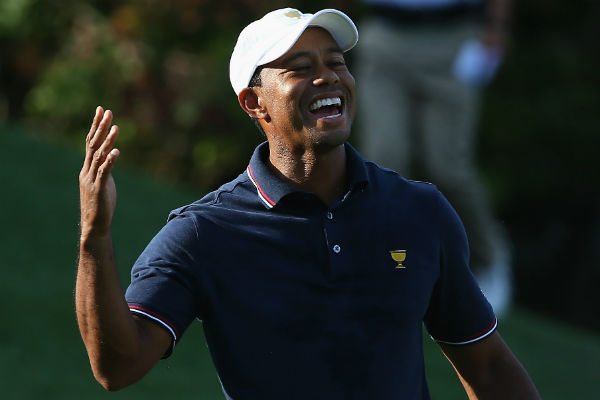 Woods feeling fantastic ahead of return

Tiger Woods makes his first appearance in competitive golf since August this week and says he “feels fantastic” ahead of the Hero World Challenge at Isleworth Golf & Country Club in Florida.

On his last outing he failed to make the cut at the PGA Championship, only his fourth tournament since undergoing back surgery in March, and that led to his decision to take time out to rest body and mind.

Woods is clear that it was the right decision and that his back is now fully recovered, ensuring there will be no repeat of the injury which has seen him drop from being ranked number one in the world to 24.

“But the body is good. I don’t have the sharp pain like I had at the beginning of the year. I still have some aches and pains, like anybody else my age and older. But I can play with my kids, do whatever I want. I’ve played a ton of soccer in the backyard. Am I game-ready? Probably not quite as I would like to be. I haven’t played a tournament round since August.”

Woods heads into the Hero World Challenge at Isleworth Golf & Country Club in Florida on Thursday, the tournament he annually hosts which benefits his foundation, with a new coach who is in the process of changing his swing.

The 39-year-old has turned to Chris Como, who he refers to as a “consultant”, after spending the last four years with Sean Foley. Woods insists he remains “very good friends” with Foley, but that he needed to do something different.

It was another old friend in Notah Begay who recommended Como, with Woods adding at Tuesday’s press conference: “I was very surprised and excited to see how he felt my swing should look like. It was very similar to the vision I had, and that’s where we’re at right now.”

Asked for detail on the swing, Woods added with a smile: “It is new, but it is old. I say that because I haven’t done it in a very long time. We looked at a lot of video from when I was a junior, amateur, and it was interesting to see how my swing was then and how much force I could generate with a very skinny frame.

“How did I do that? How did I generate that much power? That’s what we are getting back into. As to how long the changes will take I don’t know. I am curious to find that out myself, too.”

The swing change is as a result of the injuries that have taken their toll on Woods over the years, but as he noted: “I’m older. Father Time is undefeated. We all eventually start losing some of the things we were able to do when we were younger. As an athlete you do notice these things and we all have to make adaptations and adjustments, and I’m no different.

Woods, meanwhile, has admitted surprise at the creation of a Ryder Cup task force by the PGA of America following the United States’ latest humiliating defeat to Europe earlier this year.

As a member of the 11-man panel, Woods said: “Did I ever think we would end up in this position with a task force? No. Our job going forward is we only have this task force once. It’s so we have a process in place where everyone is happy with the selection of not only the players, but also the captains, assistant captains. If we do our job correctly we’re only going to have this once.”