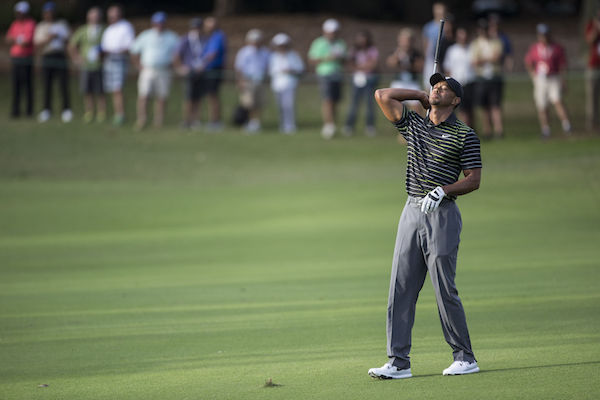 Tiger Woods’ comeback at the Hero World Challenge could barely have gone worse for the former world number one as he carded a five-over-par 77 on Thursday.

The 38-year-old has been out of action since August and he’s struggled with fitness following surgery on a pinched nerve in his back earlier in the year, all of which no doubt contributed to what he described as his ‘awful’ short game.

It was not the homecoming that Woods, 14-time winner and host of the event, would have hoped for on his home course in Isleworth in Florida, but he insists there were some positives.

“It was weird. I didn’t feel like I hit it that bad. My short game was awful, and I didn’t make anything,” he said on www.pgatour.com.

“It was just one of those days where nothing went my way. I hit a lot of good shots and I got nothing out of it, obviously. Bad chips, bad putts and a couple of missed shots on the front nine on the wrong side really compounded the problem.

“I hit terrible chips – that’s something I need to work on when I get home. It certainly is surprising that I could hit chips that poorly.”

Woods needed three chips to reach the green at the par-five 13th, and also had trouble at the eighth and 17th holes.

“I just flubbed them,” he said. “I felt comfortable on a lot of the chip shots this week as I was playing practice rounds off the tighter spots. But when it got a little grainier, it just wasn’t as good as I needed it to be.”

At the other end of the spectrum, Jordan Spieth was leading the way at six under as he looked to build on last week’s Australian Open victory. The 21-year-old was one shot ahead of Zach Johnson, Steve Stricker, Rickie Fowler and Henrik Stenson.

“Right now, I’m 11 back and possibly, probably more than that the way Jordan is playing,” Woods added.

“I’ve got three more days, and if I can get to under par for the tournament after tomorrow and then hopefully put together a really good weekend, (I’ll try to) at least get myself back in there somehow.”